After hearing a presentation by an adventurous National Geographic explorer, seventh-grader Mackenzie Johnson told her, “I really want to do what you do.”

Mackenzie’s interest in science was seriously fired up by hearing Dr. Beverly Goodman tell tales of undersea exploration in search of ancient tsunamis. In a presentation at North Rockford Middle School, Goodman told of excavating evidence under the Mediterranean Sea pointing to a tsunami in 115 A.D. that swept away a Roman harbor in Caesarea, Israel.

It all inspired Mackenzie, especially since she’s read National Geographic and watches its TV channel.

Goodman hoped to encourage more student interest in science, if not full-out geekery, by telling of her work as a marine geoarchaeologist. She admitted she didn’t even know what that was before she became one. “It’s basically a combination of a whole lot of things that I love,” Goodman told about 500 students. “I play with dirt under water.”

Goodman is an assistant professor at the University of Haifa, Israel, and a leading researcher of ancient tsunamis in the Mediterranean and Red seas. She is also a National Geographic Emerging Explorer, an honor bestowed annually on promising young scientists, photographers and others making a “significant contribution to world knowledge through exploration.” It comes with a $10,000 research grant.

North Rockford principal Lissa Weidenfeller quickly arranged Goodman’s visit when an opportunity arose. Goodman also spoke at Grand Rapids’ Harrison Park Elementary School. Weidenfeller said she and her teachers were “thrilled” to host a scientist of her stature who works with such a respected organization. 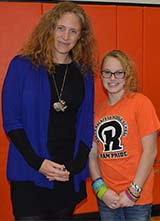 Goodman was also an ideal speaker for North Rockford’s sixth-grade Earth Watch program, an environment-oriented magnet theme. Jim Baker and Sarah Reickard, teachers in the program, said Goodman’s talk not only fit well with their courses but showed students an exciting example of a working scientist. And the brand name was a plus. “Everyone grew up with National Geographic,” Baker said. “Now you have someone from the pages who’s actually here.” Her talk supported his students’ study of plate tectonics.

Reickard also welcomed the example of a woman in a largely male field, saying many students think “it’s kind of a manly avenue to take.”  Goodman showed students a career in science is “actually a job you can have,” said Reickard, noting she constantly uses National Geographic in her classes. “It makes it come to life for them.”

Goodman said she grew up reading the magazine and appreciates how it can inspire students’ interest in science. But whether it’s science, art or auto mechanics, she said, students’ learning should be driven by a passion for the subject.  “I try to encourage kids, love what you do,” she said. “Keep learning it and enjoy it.”

Digging the Debris of History

In her presentation, Goodman explained she studies archaeology using geological techniques. She showed photos and video footage of using a kind of underwater vacuum cleaner to excavate objects from the seafloor and digging out dirt core samples with long pipes.

Her interest in underwater exploration came from her Milwaukee childhood and spending time at Lake Michigan. She was fascinated by shipwrecks such as the Edmund Fitzgerald and the Titanic. When she first saw photos of the latter, she said, “To me, anything was possible.”

That sense of wonder drives her work, which involves digging up shells, pottery and other debris from the seafloor showing evidence of tsunamis at a certain point in history. Such evidence is important to understanding the frequency of tsunamis, the effect of rising sea levels and the threat they pose to heavily populated shorelines, she explained. “We need to know, what’s happened in the past. What’s happening on our coastlines? What do we need to be prepared for?” 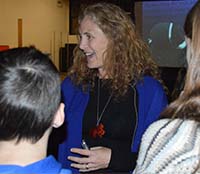 Her team’s findings on the Mediterranean Sea tsunami tracked with written records of a “great wave” that hit Israel at 11:11 p.m. on Dec. 13, 115 A.D. Superintendent Dr. Michael Shibler seemed as fascinated as the students. He spoke afterward with Goodman, who said her research shows that tsunamis historically have been under-reported. “Now we’re catching up,” she said.

“Your research could save lives someday,” Shibler told her.