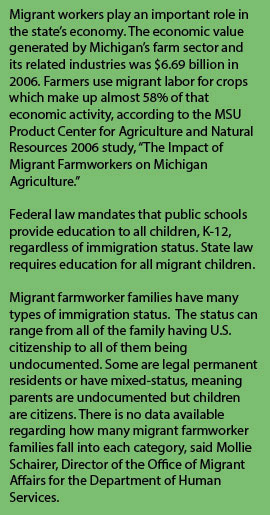 Editor’s Note: This is the first in a three-part series about the migrant studentpopulation and how teachers and administrators work together to serve them. The series focuses on Kent City Community Schools.

Migrant workers’ contributions to the economy are undeniable, with the literal fruits of their labor evident on grocery store shelves and in the millions of bushels of fruit harvested and cherished in Michigan each fall. They come for opportunity, and to work long, hard summers. Their children become part of a school community, and educators describe serving their needs as rewarding, challenging and an-always moving target.

It is early November, and for sisters Romalda and Rufina Ordaz, the last day of school at Kent City Elementary. A season spent in this northern climate where their parents pick fruit in the orchards has come to an end.

As Rufina sits down for lunch, her friend Emma Leech leans over to hug her. “I’m going to miss you,” she said. Emma will be awaiting Rufina’s return next year.

Meanwhile, in gym class, Romalda and her classmates learn the basics of volleyball by bouncing  balloons on their heads and forearms. Romalda becomes a whir of motion as she plays.

That evening, they begin heading south with their parents, Esteban and Maria Ordaz, and 4-year-old brother, Esteban. They’ll go to North Carolina, where migrant pickers find work throughout the winter months. The girls planned to start in their elementary school outside of Wilmington by the end of November, after a weeklong stop to visit family in Georgia. They spend the winter living in a trailer near the crops.

Romalda is in third grade, and Rufina is in fourth. Romalda likes math, reading and writing, and Rufina is excited to be learning multiplication. They work hard in their classes, and despite their bi-annual transition are nearly performing at grade level.

Romalda wants to be a teacher. Rufina wants to be a doctor. “I like when we are here,” Romalda said. “I like the teachers. They are really nice to me, and they help me learn.”

“I’ve got friends” Rufina added. “They are nice to me.”

The girls are part of about 100 migrant students at Kent City Community Schools whose families settle in the area each spring and stay until the snow threatens to fly. The families pick crops, mostly apples, from about 20 surrounding farms.

Statewide, the 2013 estimates for migrant and seasonal farm workers and non-workers in Michigan was 94,167, with 2,685 in Kent County, according to the 2013 Michigan Migrant and Seasonal Farmworker Enumeration Proﬁle Study, a project of the State of Michigan Interagency Migrant Services Committee.

This fall, 2,896 kindergarten through 12th-grade migrant students were recruited for school across the state. Of these, 2,619 were served by migrant programs, according to data from the Michigan Department of Education/Office of Field Services.

That’s a big increase from a year earlier when harvests were down. Only 1,278 kindergarten through 12th-grade migrant students were recruited and 1,134 served by migrant programs.

Pickers work long hours, up to seven days a week when the weather is good and crops are plentiful. Often children accompany their parents working in the fields. The children also can enroll in a six-week Summer Migrant Program, where they get all-day school instruction, meals and field trips.

Each spring, Barb Berry, teacher of English Learners and family liaison for the migrant population, works to get students enrolled in the Summer Migrant Program at Kent City Middle School. It serves students from five school districts: Kent City, Sparta, Coopersville, Kenowa Hills and part of Ravenna. It is one of 28 summer migrant programs in the state, operated with a unified curriculum. This school year, the Kent City program served more than 200 students. Kent City had the largest population of migrant students in Kent County.

Many students attend the first quarter of the regular school year, but in late fall, empty trees and cold days direct their families south to Florida, Georgia and North Carolina. Some, this year 25 children of 102, remain during the winter months.

While some students are in school one day and gone the next, Berry has encouraged families to inform teachers when they are leaving so the class can say good-bye. “The students need closure. They need to be able to do that,” Berry said. 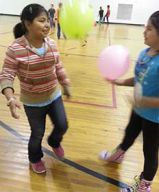 First-grade teacher Angela Post celebrated migrant student Israel Hernadez’s last day with a big farewell, lots of hugs and a few tears. It was the day after Israel had seen snow for the first time. His parents pick oranges and strawberries in Florida during the winter, and it was the family’s first fall in Kent City.

Students wrote letters for their friend to read during the ride south, and Israel, who was one of five migrant students in Post’s class this year, wrote a note to say good-bye.  Classmates Johnny Rewa and Cooper Houtman said they will miss recess and playing the game Red Light, Green Light with their friend.

It’s difficult when migrant children leave, Berry said, explaining that the class gets to know them well. “When they return, it’s a different school year.”

In September migrant students trickle in over the first two weeks of school, and Post puts a big emphasis on creating a feeling of community.

“All year you are thinking about them, how they are doing,” Post said. “They have a special place in your heart.”

This series focuses on refugee students and their journeys, their new lives and hopes for a future in West Michigan, and the many ways schools and community organizations are working to meet their needs.