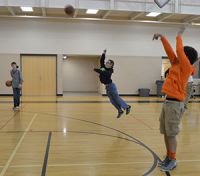 The booming voice echoed through the gymnasium, over the sound of a dribbling basketball, just before eighth-grade student Kyle Bueche threw up a three-point shot.

While it was a regular Tuesday afternoon following lunch at Byron Center West Middle School, gym teacher RJ Bentley grabbed the microphone as he always does when Kyle plays. Kyle, who has Down syndrome, has become well-known in Byron Center for his ability to make three-pointers. “He’s a baller,” said eighth-grader teammate Charles Shride. “He’s a three-point specialist,” said eighth-grader Nathan Stickler, another teammate.

Many mornings before school Kyle comes to the gymnasium, basketball in hand, to spend time shooting around. “I go into the gym and shoot some threes,” said Kyle.

“It was emotional. We were so happy for him,” said eighth-grader Jacob Hooper. Emotional may be an understatement. Krauss said the crowd went wild. “Everyone in there just exploded,” he said. “Our whole bench was cheering and just yelling. Some of the parents were getting a little teary-eyed.”

Krauss said he wanted Kyle to have a chance to get on the court during a game. “He definitely can play. He is just an outstanding shooter. I just thought it would be really cool for him to have that experience,” Krauss said.

The team finished its season before winter break with a 10-1 record. Krauss said Kyle was a great part of the team with his happy-go-lucky attitude, helpful nature and ability to be a great friend.

“It’s been a lot of fun,” said Krauss. “Kyle fit in really well this year with the kids. I think a lot of the chemistry he brought to our team really benefited them.

Kyle, the son of Ed and Linda Bueche, and his teammates are friends outside of the gym as well. Many of the basketball players have known him since sixth grade or before.

While eating lunch recently, they demonstrated the hand sign Kyle used after making his three-point shot: a circle over the eye with three fingers up, just like University of Michigan basketball player Nik Stauskas.

The boys talked about how funny Kyle is, how he talks to everybody in the hallways and knows all the students’ names.

Kyle said he loves being part of the team. “I felt that we had a great season … We competed well overall. I think Coach Krauss putting me as team manager was a perfect fit,” Kyle said.

Christmas in August wraps up