World Peace, Aid for Refugees on Display in Final Projects

Helping refugees acclimate to living in the U.S. and mock trials using forensic science were among the many final projects students from Kent ISD’s Innovation High displayed last month before winter break.

Students set up booths at Innovation High to display their projects and were eager to share what they learned. Courtney Pagniello made a cheat sheet for foods which showed where they go in the kitchen and what to buy. “It was a cool experience that only Kent Innovation provides,” she said.

Teach Others, Learn About Yourself

An entire wing at the school was dedicated to projects students made for Bethany Christian Services. Among the organization’s many missions is providing resources for resettling refugees. Representatives from Bethany had brought refugees into Innovation High to aid students in developing projects that would help the refugees get accustomed to cultural changes and communication practices.

Students shared knowledge with refugees about living in the U.S. “For us, a lot of this stuff was pretty basic, but for them it’s totally different,” said Zoe AuFrance, whose group created a guide to kitchen appliances.

“When they came here, everything was foreign to them,” said one of AuFrance’s partners, Lauryn DeShane.

Working on the refugee projects was an eye-opener for many students as it showed them how much one’s lifestyle changed when moving to a new country. “Our lives are way more advanced,” said Brett Lavoie, whose group made an easy cookbook and appliance flash cards. “We got to learn how they had to adapt.”

Some refugee service projects explained how to get a job or what different parts of a car did. The goal was to “show not tell,” so refugees could learn visual cues for different activities.

“It was fun because we knew they would actually use our project,” said Samantha Bickety, whose group made flash cards that showed what various road signs meant. 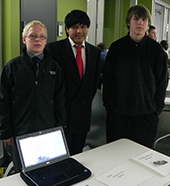 Other groups developed concepts for ways to mend the world after acts of violence and terrorism. Students had studied patterns of American involvement in war and foreign policy that led to the 9/11 attack and its aftermath.

“We want students to be critical thinkers about the violence that occurred,” said Innovation High world history teacher Mike Kaechele. “The goal is for them to have a perspective from a worldwide viewpoint, not just as Americans.”

John Winquest, Lashawntay Herrin, and Kenzie Cain had been studying the way America reacted to the attack through violence at Abu Ghraib and other incidents. They agreed the world needs to work together to solve problems.

“America isn’t as perfect as we may think. We are always sticking our nose in other countries’ business,” said Cain.

“Bring Your Own Reaction”

Science students also participated, creating projects to show understanding of scientific standards. Student Tristan Wayne programmed a calculator with the formula to determine the gravitational force of any weight. Ben Swanson showed how heat transferred into a cup of water suspended over a Bunsen burner.

“We learn stuff while having fun with science,” Swanson explained.