BC Principals, Board Member Take on Ironman Challenge to Help Students 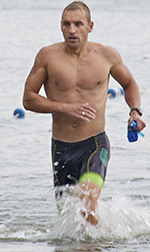 When it comes to setting a good example for students, two Byron Center principals and a Board of Education member are making an ironclad commitment.

Dubbed the “BC Ironmen,” Byron Center High School Principal Scott Joseph, Nickels Intermediate School Principal Tom Trout, and Board of Education member Jason Pierson are training to compete in the 140.6-mile Ironman Wisconsin on Sept. 7 in Madison.
Ironman races must be finished in less than 17 hours. It’s a race that seems insane to even most athletic people: a 2.4-mile swim, followed by a 112-mile bike ride, and culminating in a 26.2-mile marathon.
But for seasoned triathletes Joseph and Trout and Pierson, who has competed in several sprint-distance triathlons, the goal is to make a positive difference in students’ lives through local organizations.
Competing for Causes 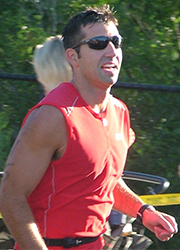 Striving for the Impossible

The school leaders say their endeavor parallels with the missions of the charities they have chosen to support. “If you think about the history of Ironman, it was originally thought to be humanly impossible,” Joseph said.

Eliminating hunger is also thought to be undoable. Connecting high school students in positive relationships with adults and getting students committed to fitness are also huge challenges, he said. But big goals can be achieved through a plan, belief in oneself and community support, he said.

“Very quickly we can do very big things,” Joseph said. “When you looked at it from a K-12 perspective, we are looking to connect kids emotionally, physically and spiritually,” said Joseph. “Mind, body and soul.”

So what does it take to prepare for an Ironman?

The training schedule begins at eight hours a week, building up to 20 hours.

“You really have to compartmentalize it,” said Trout. “That’s the key to finishing these races and even tackling the training. You just have to break it into little parts.” Trout, 43, has clocked a personal best Ironman time of 9 hours, 57 minutes. He has competed in more than 300 triathlons and nine Ironman competitions, including the Hawaii Ironman World Championships race twice.

Joseph, 37, will be attempting his first full Ironman. He has completed a half-Ironman and about 15 triathlons. He is involved in Adventure racing, a multi-sport race including mountain biking, kayaking and running. He competed with Trout in the Adventure Race National Championships in October.“As I get older, it’s become more about how can I use this hobby of mine to do good for other people,” Trout said. “It becomes an inspiration for people, and it can be used to help kids in need and promote a life of fitness and health.

Pierson, 43, a business innovations leader for Amway, first sought fitness advice from Trout four years ago and began running “a mile a day in May.” He increased his distance over time and built up to several sprint-distance triathlons and the Grand Rapids Triathlon. Ironman is a big dream, he said.

“It seems a little insurmountable to me, but it’s a good goal,” Pierson said. “What I like about it is you can’t fake it, you can’t cheat it, you have to get up and do it every day. It’s not just an endurance race. The whole lead up to it, you have to keep on it,” he said.

To support the BC Ironmen, watch the “BC Ironmen for BC Kids” video