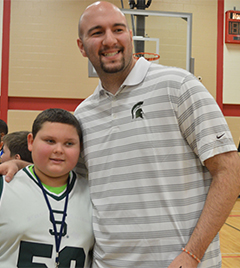 When Ianni was 4-years-old, doctors and specialists informed his parents he would barely graduate from high school, never go to college and would likely live in a group home as an adult.

“People said I would never be an athlete,” he told Valleywood Middle School students during a recent stop on The Relentless tour, sponsored by the Autism Alliance of Michigan.

Despite the dire early predictions, the 6-foot, 9-inch former center with a size 18 shoe went on to play basketball for MSU Coach Tom Izzo.

“You’re the only person in your life that controls where you want to go, what you want to do and achieve,” Ianni said.

Ianni graduated with a degree in sociology from MSU. While in college, he played on the  Spartan team that won two Big Ten Championships and a Big Ten Tournament title. He was also a member of the 2010 Final Four team. He was the recipient of the 2011 Tim Bograkos Walk-On Award and the 2012 Unsung Player Award.

“I worked hard at everything, from school to my social life,” said Ianni, 25. “I had to work hard for everything. I had to earn it.”

Ianni, who grew up in Okemos, was diagnosed as a young child with pervasive development disorder connected to autism. He had trouble with communication, including not understanding sarcasm and innuendos.

While he struggled through school and faced bullying because of his disorder and his height, he said he relied on motivation and a mindset to prove doubters wrong.

Plus, his family and teachers provided endless support.

“My teachers are the number one reason I am in gyms in schools talking to kids today,” he said. “Teachers sacrificed a lot for me. They helped me get ready for the next stage in life.”

The Relentless Tour includes 659 stops this school year. Ianni said he shares his message because many autistic children are targets for bullies. He told of how he got the last laugh with one boy who was especially mean during his elementary-school years. When Ianni was a Spartan, that former schoolmate asked for his autograph.

“I proved that bully wrong,” he said.

Ianni named many famous people who have described themselves as victims of bullying, and had a message for students who pick on others: “That person you mess with, bully or tease could be your boss one day,” he said.

Chrysta McClymont, who teaches autistic students at Valleywood Middle School, helped coordinate Ianni’s visit. She recently started the VIP Program at the school pairing general education students with autistic students to learn from each other through activities and experiences.

Seventh-grade student Vincent Nelson, who is involved in the VIP Program, said he liked Ianni’s message. “I think it’s really inspiring,” Vincent said. “I want to help a lot more people with autism.”

Steve Aurand, event coordinator and team dad,said Ianni serves as a strong example for families of children with autism, and he raises awareness for all.