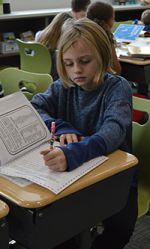 West Michigan educators are taking a collaborative approach to boost third-grade student reading proficiency up to the 80 percent mark in five years.

Superintendents are joining forces in the new Region 3West Michigan K-3 Reading Now Network to glean knowledge from each other in meeting the goal for third-grade students in all demographic groups, and to zero in on intervention strategies for students not up to par. Region 3 is represented by 100 superintendents in 13 counties: Allegan, Barry, Ionia, Kent, Lake, Mason, Mecosta, Montcalm, Muskegon, Newaygo, Oceana, Osceola and Ottawa.

The goals of the network were recently introduced at the Michigan Association of School Administrators meeting.

What is the Need?

The focus on third grade is crucial because research shows children who do not read proficiently in third grade are at a much higher risk of failing to graduate from high school, struggle in other areas of school and end up in jail or on welfare.

In West Michigan, 67.84 percent of students scored proficient on the reading portion of the MEAP test in the fall of 2012. Statewide, that number was 66.5 percent. The region as a whole has improved from 61.17 percent proficient in 2008-2009.

Reeder said the network aims to look at practices that are working at schools, and see what lower-performing schools can learn from higher-performing ones.

“How do we take the concern around not only third-grade reading, but reading in general and how do we support each other?” he asked.

“This would open up avenues for more teachers to make connections,” Reeder said.

Districts considered to be “beating the odds” despite an at-risk population can demonstrate how they have achieved good results. Eighteen schools in the region have been recognized as “Reward” schools for narrowing the gap between the lowest and highest performing students.

Haines said commitment from schools will require collaborating, cooperating and not competing.

In his own district, two lower performing elementary schools collaborated with higher performing ones to model successful efforts. All schools saw improvement by sharing strategies, he said.

Other goals include assisting parents in helping their children read, including non-English speaking or non-reading parents.