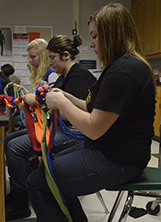 Superheroes were out in force at Thornapple Kellogg High School and their tasks were many.  Fleece blankets had to be made, food had to be packed for hungry children, and animal shelters needed help with supplies.

Never fear, they did it all and a whole lot more during the school’s Service Day in January.

More than 30 nonprofit organizations came to the school and took over the classrooms, talking to students about what they do and getting some hands-on help with items they needed.

“It’s just awesome,” said Lyndsey Fischer, one of the organizers of the day, which had a superhero theme this year. “We teach kids how to give back to the community.”

Students made a wide variety of items for their community, including:

They also heard speakers from Michigan Blood, Paws With a Cause, Barry County United Way and Substance Abuse, Camp Algonquin and AmeriCorps.

“It’s good to help people out that need it,” said senior Marisa Deloof of the purpose of the day.

Before the day of the event, students donated items for the activities, bringing in things like old T-shirts, pretzels and Ziploc bags, duct tape, fleece fabric and more.

The teachers had no chance of saving their hair. The kids raised 16,000 points, four times the number needed. Service Day started in the gym to watch the shaves before hearing speakers and making items to help.

It was a fun start to what is a serious part of life, according to Principal Tony Koski. “There’s no more important learning than service learning,” he said after the assembly. 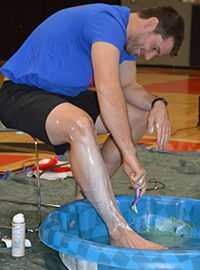 Student Council advisors Fischer and Liz Ritsema organized the first service day in 2012. It was intentionally scheduled the day before Christmas break, but a snowstorm caused it to be rescheduled to January.

“It’s one of the most wonderful experiences I’ve ever had,” said teacher’s aide Fran Jones as she watched kids go to their classrooms. “What a cool way for kids to think about someone other than themselves.

In art teacher Barb Maring’s room, two groups of students were sewing fleece blankets together. They were helped by volunteers from a local church, who explained how the blankets were given out.  “The kids get excited about serving other people,” Maring said. “They talk about it for days afterward.”