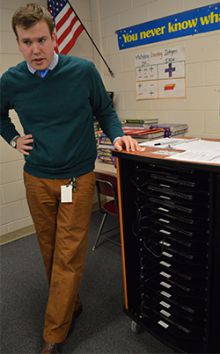 It was Go Noodle break time in first-grade teacher Kristen Keifer’s classroom. Students hurried from their desks to stand in front of a projector screen, which blinked to life with cheerful, animated characters.

After a student pushed a digital pen on the screen to start a “brain break” game, the children “danced like you’ve got ants in your pants,” singing along with on-screen characters, and pausing on cue to blast the ants with invisible bug spray.

“I love the breathing. It gets them ready,” Keifer said as she moved on to the next task of the school day.

Comstock Park Superintendent Ethan Ebenstein watched the interactive session at Stoney Creek Elementary School during a tour tied to the nationwide Feb. 5 Digital Learning Day, which encouraged schools to highlight integration of technology in the classroom.

While technology these days is expected in math and science class, it’s also being used in less-predictable ways.

In music teacher Amanda Hite’s class, music notes, like “EEF EED,” are projected on screens for the teacher to point to as students sing and drum. Instead of having individual music sheets, a document camera is used to display one for all to see.

In Comstock Park, all grade levels are benefiting from new technology, thanks to $4.5 million of the $29.4 million bond passed in February, 2011.

Ebenstein said the district chose to invest in many different types of devices and equipment rather than implement a model where all students receive a laptop or iPad.

Instead, classrooms have access to carts of laptops available for student use, iPads and interactive projectors. Some TVs are outfitted to display computer screens when connected to laptops. The high school library has been transformed into a commons-style media center and a flex lab where students can easily work in groups. Break-out spaces are outfitted for technology with lots of outlets and equipment.

The district also has invested a portion of bond money allocated for technology on infrastructure to provide wireless access for the many devices in use. More investment is planned to increase bandwidth, since the number of users continues to grow.

“I would estimate 85 percent of high school kids are coming in with a mobile device,” said Comstock Park Middle School Principal Gus Harju, who noted that all high school teachers have used smart phones and other devices as part of their lessons.

For teachers, digital learning goes far beyond having students watch a screen. They say it’s about using tools to enhance real-world learning experiences.

In teacher Lisa English’s seventh-grade English class the days of turning in a paper and having it returned covered with red ink a few days later are a thing of the past. While Madison Fox wrote a story, a message from the teacher popped up on her screen telling her to fix punctuation in several places. Using the Google Docs document, Madison could make changes on the spot.

English said she knows when students aren’t staying on task much more easily than in the past. Also, the ability to offer immediate feedback helps things sink in better for the young writers. “I feel like definitely the quantity and quality (of students’ writing) is improving,” English said.

The class is also learning to peer edit each other’s work on Google Docs.

“Now you can have three people working on different computers and see everyone’s stuff at the same time,” said seventh-grade student Nathan Grypma.

When it comes to excitement over digital learning, Comstock Park K-5 technology teacher Tony Molnar is the man to see.

During the tour, Ebenstein walked into a computer class where fifth-graders were busy at work. “We are doing coding today,” Molnar said, eager to describe how students were learning basic computer programming though Code.org. They used “repeater blocks” to program a red Angry Bird character to hop toward a green pig and stomp it into oblivion.

Fifth-grade students Leionna Wagenborg and Shanthony Taylor chatted about how to pass the increasingly complicated levels. “It just seems like a game,” said Shanthony.

What Code Should You Learn?