Students Build Their Dreams One Class at a Time 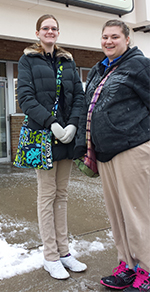 April Lansdale stands at the white board in front of the class, figuring out a math problem. But for her and a dozen other students, it’s more than an academic exercise. The answer could help these young adults with special needs find a home of their own someday soon.

Here’s the problem: A friend has offered to rent you a house. It costs $784 in rent and utilities, and you make $9.50 an hour at your job. Throwing in phone, groceries and other expenses, can you afford it?

Lansdale tallies the expenses and earnings. She’ll also need a little extra, she says, “Just in case something else happens,like you’re in an accident or need money in a hurry.” Bottom line, she shows $103.72 left over after expenses – enough to move in, but barely.

“Excellent. Let’s give a round of applause for April,” says teacher Michael Spagnuolo. He also gives props to the class as they endorse each step of April’s calculations.

“You should be proud of this,” Spagnuolo tells them. “This means you’re retaining the information, and you’re generalizing it so you’ll be able to move out.

“You gotta believe in yourself ladies and gentlemen,” he adds. “That’s why we work as a team. Teamwork makes the …”

“Dream work!” they shout in reply.

Achieving dreams is the work of this close-knit class at North Rockford Middle School.

They are young adults from 18 to 26 who have completed their high schools’ academic requirements but need more skills to enter the workforce. The students have a wide range of disabilities, such as autism and emotional impairments, but have the potential to hold down jobs and live on their own.

“We’re trying to teach them to be able to flap their wings as independently as possible,” says Spagnuolo, a veteran special-education teacher in his first year with R1TS.

His R1TS #1 class serves the highest-functioning students in the three levels of the program. Many students come into his program through R1TS #2 for those needing more assistance. Students in R1TS #3, taught at both Rockford and Cedar Springs, are not cut out for jobs but learn the safety and social skills needed for daily life.

Spagnuolo’s students spend part of their days in class and three-plus hours at work sites. Two students this year have been hired at Kmart and Gill Industries. Spagnuolo is confident others will follow them to the job market.

“So many of these students have learned helplessness and lack confidence,” he says. “We want to make sure we build that confidence so they can grow and believe in themselves.”

Students hope part of their growth is starting a coffee shop. They recently submitted a grant proposal to the Rockford Education Foundation for equipment to sell brewed java out of a kitchen next to the classroom. They’ve already sold more than 100 bags of coffee to help fund class activities.

In Caledonia, the coffee shop is already a reality.  Staffed by students in their transition program, The Daily Grind at Duncan Lake Middle School serves up lattes, flavored coffee and cookies. Other students staff a shop where they make paper and turn it into cards to sell. Caledonia Coffee Shop story

Students’ days at R1TS begin with meetings to go over life issues, and reviewing academic skills before heading to their job sites. On Thursday evenings they hit community activities such as snow tubing at Pando Park or riding the Rapid bus system.

For many, the class is a family where they form strong friendships. Some say they feel accepted here as never before. “When I first started R1TS, I was this shy, quiet person,” says April Lansdale, 20, of Comstock Park. “Now that I’ve been here, I’m open with people.” She adds to her classmates, “All of you here care.”

But going to their job sites, and the chance to get paid jobs eventually, is the major draw.

“The most important thing Icare about is getting a job so I can move out of my parents’ house,” says Sara Zandstra, 19, of Cedar Springs. Adds Tom Carlisle, 24, of Sparta, “Being employed is my New Year’s resolution.”

“She has come so far,” adds Susan Balas, a paraprofessional who places and evaluates students at job sites. “It’s so exciting to see how she has blossomed since she came here.”

Amanda Bremmer, who worked at Rite Aid stocking shelves and helping customers, helped train Allison Cowell for the same work. Amanda recently transferred to Big Lots and hopes to be hired by a company soon.

The jobs have helped her save money and work as part of a group, says Amanda, 21, of Rockford. Eventually, she says, she wants to save animals in sheltered homes, to “give them a forever home so they don’t have to be in pain and suffering anymore.”

Allison, 20, of Northview, says both the class and job site helped her overcome a fear of public speaking: “For the first couple weeks (at Rite Aid) I wasn’t comfortable with customer service, but later on I decided I was ready.”

Spagnuolo has seen her grow from a student who wouldn’t speak in front of class, to one who wrote and sang him a song for his birthday. The song includes the line, “We didn’t know what to do or what we were gonna be/ That is, until you came to help us with our destiny.”

“My students are my gold,” he says. “I am the lucky one to be working with them.”