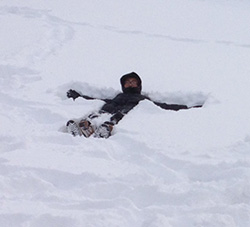 Also, there is the potential for a group of East Kentwood students to attend a summer camp this year in China, through Weiming Education Group.

While here, winter camp students attended classes to shadow their American peers and see what would be in store for them if they enrolled here full-time. They also went to athletic events, visited downtown Grand Rapids, Grand Haven, Craig’s Cruisers and Rivertown Mall.

They experienced a winter climate snowier than they had ever seen, as heavy storms closed schools for much of their stay.

“The snowy weather had them thrown for a loop,” said Kentwood ELL interventionist Erin Wolohan, who works closely with the Weiming students and host families.

But Kent Zhuang, for one, didn’t mind at all. He went right out and made a snow angel in the yard of his hosts, Peter and Linda Skornia of Rockford.

“It’s nice, very nice,” said Zhuang, an eighth-grader. “The snow is warm because everyone in Michigan is friendly.”

Other students and host families also took it in stride. Campers enjoyed shopping for shoes at Rivertown, where they could pick up their favorite styles for about half the price as in China. Bernie Lu, who loves basketball, said he looked forward to watching the East Kentwood varsity basketball game.

While having fun was key, the camp was meant to whet student interest in attending local schools, officials said. Some Weiming students also study in Minnesota schools.

“These kids will go back and tell their friends in China about their experience here,” said Jeff Hayes, coordinator of the Weiming program in Rockford.  “The goal is to get them interested in coming to West Michigan when they’re juniors.”

With help from a translator, Arthur Li, 16, said he was interested in taking biology courses at East Kentwood.

“It is so interesting. The people are friendly,” he said.

Kent Zhuang taught his host family, the Skornias, how to say the Chinese Year’s toast as they clinked glasses of white grape juice. He has also taught daughter Margo, a Rockford ninth-grader, the lyrics to a Chinese children’s song. And he and Margo, who visited China last year, helped make fortune cookies for Margo’s mother, Linda, to take to work.

“I had no idea how much we’d enjoy this,” Linda Skornia said. “He’s very open about explaining the (Chinese) culture.”

Asked if he would like to attend school here, Zhuang replied carefully, “I need to see my mother’s advice.”

Chinese Students in Kentwood and Rockford: So Far So Good

On the matter of energy

‘They can create their own career path’