How Are Districts Meeting the Needs of Gifted Students? 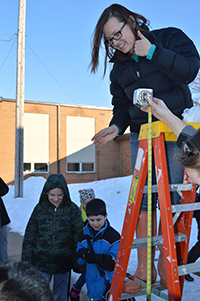 Challenged with designing a structure to safely hold a raw egg when dropped from several feet above the floor, Oriole Park Elementary School third and fourth-grade students started brainstorming in groups.

“We can use the six cotton puffs under the egg,” suggested third-grader Nate VanderBeek, as he sketched his vision.

Teacher Sarah Baker, a former teacher at The Roeper School, a private school for gifted children in Bloomfield Hills, said her goal with the class is to encourage high-level thinking through research projects and allowing students to explore their interests.

“If they discover their passions at an early age, they are more apt to follow them at a later age,” she said.

Wyoming Public Schools’ introduction of a gifted program stands out.  It comes after a long stretch of districts’ cutting such options after the state stopped them – more than a decade ago.

In Wyoming, students are invited to the program based primarily on Scholastic Reading and Math Inventory assessment scores.

“Wyoming has continued to grow opportunities for secondary students, including additional honors classes and AP classes since funding was eliminated for gifted and talented programs, but unfortunately, with tight budgets it has been a challenge to add things,” said Wyoming Superintendent, Tom Reeder. “Now with a better looking budget … we are hoping to add smaller programs which impact student opportunities. The higher-achieving students in 6th grade and younger had no special opportunities.”

The program is being paid for through the district’s general fund budget.

Teachers are calling her for support at the early elementary school level. Increased focus on preschool programs seems to be producing very young children in need of greater challenges, as well as the addition of a growing population of scientists and physicians employed on the Medical Mile in Grand Rapids burgeoning health care industry, Baldwin said.

Effects of a Vanishing Funding Pot

“At one point Grand Rapids Public Schools had, arguably, the first or second best K-12 program for gifted and talented student in the state,” Baldwin said. Suburban kids would enroll in the GRPS Lighthouse program, run on Saturdays for gifted kids.

Judy Freeman, former director of gifted and talented for GRPS, said the district once had $200,000 earmarked for gifted and talented programs.  They included the Spectrum Program, which served 1,000 elementary students, and the Saturday program for enrichment activities. Both served district and non-district students. Many GRPS students enrolled in Spectrum went on to attend the nature-based Blandford or Zoo sixth-grade schools, and then onto City Middle and High schools.

“It was a great, magnificent program,” Freeman said.

Years ago, Kent County districts split up a pool of $235,000-$240,000 based on state grant money for gifted education. Schools were required to match their share to produce a budget that included gifted programming and teacher professional development. In addition to that, Kent ISD would receive $25,000, which also required a match, per year toward an ISD gifted and talented consultant and countywide programming.

Baldwin said after the state cut funding, most districts hung onto programming until their own budgets needed trimming.

Bucking the trend, Kentwood Public Schools kept its comprehensive gifted and talented P.E.A.K.S program, which remains a full-time, self-contained program for applicants from third through eighth- grade. It operates out of the district’s Discovery Elementary and Crestwood Middle schools.

Gifted students are defined in the U.S. Department of Education Elementary and Secondary Education Act as those “who give evidence of high achievement capability” and “who need services and activities not ordinarily provided by the school to fully develop those capabilities.”

Freeman said many schools have been successful in switching to a “differentiation” curriculum that helps teachers challenge students to work at different levels and paces in a mixed-ability classroom. GRPS has maintained the Zoo School and Blandford School, and City High and Middle schools, for academically talented and highly motivated students.

Other good options for gifted students are “We the People: The Citizen & the Constitution”, a competition that tests students’ government knowledge; Odyssey of the Mind; which focuses on creative problem-solving, chess clubs, debate and Science, Technology, Engineering and Math (STEM) programs. High Schools offer Advanced Placement and dual-enrollment classes where students take college courses in high school.

“Every one of our districts has some level of gifted programs,” Baldwin said.

“It’s not like we are without programs,” Freeman said. “But we just don’t have a way to ensure programs are in place, and I am not sure all students who are gifted and talented are being identified as such,” she said. “What’s the assurance every child is getting their opportunity? There really isn’t one.”

“When it comes to districts having to cut programs and services, many people do think that their highest ability kids will make it anyway,” she said.  Studies conducted by the Fordham Institute, however, indicate struggling students are more likely to receive attention than those who are gifted and, more telling, gifted students who are not challenged may regress academically.

But Baldwin knows gifted students come with their own set of challenges, which is evident when students start ATYP classes.

“What we are really teaching these kids is how to encounter something difficult, struggle with it, and achieve. Our brightest kids don’t get that in school enough,” she said. “They get a distorted idea of their own ability. They get the mistaken idea that being smart means getting A’s with no effort.”

She said top universities see that trend all the time.

“Top scoring students walk in and I would consider them at risk because many of them have never had to make an effort,” she said.

National Society for the Gifted and Talented

Center for Gifted Education Policy at the American Psychological Association

Supporting Emotional Needs of the Gifted