Nearly $100 million in grant money is helping school districts across the state update their technology so students can take standardized tests like the MEAP online.  The switch to online tests means students will get more help where they need it, because their teachers will see test results so much faster.

The Michigan Department of Education awarded the grants which set aside $50 million last year in state aid money for the project that started last June. Another $45 million will be spent during the 2014-2015 school year, with $50 million requested for the year after. Additional funding will be needed in future years to help all schools with these needed updates.

Making changes so they can offer online tests will keep schools up-to-date with the next generation of testing methods.  Also driving this change are the new Common Core standards adopted by the state, which require online testing.  And while some MEAP tests will be discontinued under the new standards, the remaining MEAPs will also switch to online versions.

“Schools need to have the technology, knowledge and skills to do testin

g this way,” said Glen Finkel, director of information technology services for Kent ISD who is on the steering committee for the grant.

A Big Change for Students and Teachers

Michelle Morrow, a third grade teacher at North Godwin Elementary, agreed. “Technology is not going to go away,” she said. “For our students to be successful in their careers and college, they need to be doing this type of testing.  This will make them better prepared for whatever they go into.”

Morrow is also a coach for her district, helping her colleagues prepare for online testing.  This involves taking teachers through a half dozen modules that provide  background on the testing and showing them activities to use in the classroom to familiarize students with the new testing method.

Since the tests will be done in a completely different way than the MEAPs, there is a definite learning curve in figuring out how to do them, she said. Overall, Morrow said she thinks the new tests show student progress better than the old ones did.

The online tests are designed to be much more personalized for students, explained Dorothy VanderJagt, Kent ISD director of Teaching and Learning. “These tests can build on each student’s knowledge,” she said.  This means teachers can more accurately understand what a student knows and doesn’t, and “then teach more directly to meet a student’s need.”

The grant helping schools get ready is called TRIG, which stands for Technology Readiness Infrastructure Grant.  Tim Hall, project director for the state-wide effort, explained the grant has four main parts including:

An early benefit to taxpayers is the cost savings realized as districts combine their purchasing power to obtain needed computers, laptops and personal learning devices. Two hundred school districts joined together to buy the equipment in one deal rather than individual contracts, saving more than $9.5 million, according to Hall.

Some were skeptical of making such a large joint purchase of computers, since it had never been done, Hall said. “We didn’t know what to expect,” he said. “We were really pleased with the outcome.” He said the companies behind the new technology equipment are also providing $600,000 of free training to teachers.

The TRIG initiative is being developed by five groups representing the state’s 56 ISDs, 541 school districts and 136 charter schools. Kent ISD leads one of the five groups guiding the project.

“They (Kent ISD) really stepped forward to say they’re committed to what we’re doing, and we wouldn’t be positioned as we are to move forward, without them,” Hall said.

Local school districts involved in the grant are helping to develop portions of the roll-out plan that will be used statewide. While this is quite different from most grants, it’s a welcome change. “Any programs for our schools work better when we create them in collaboration,” said Kevin Konarska, Kent ISD superintendent. “Helping our districts update their technology is no different. Solutions are always better when we do them together.”

Part of the first year’s grant money paid for a system that tallies dozens of details for each district to determine how ready they are to adopt online testing. This task was given to the group led by Kent ISD.  The group members examined issues like how to tell whether a school’s computer hardware has enough capacity to handle the actual test taking, and whether schools have enough bandwidth for all the devices used simultaneously during a test. 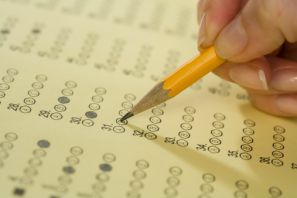 Some schools won’t be able to ramp up their technology enough to be ready for online testing by next school year, which is the grant’s goal, so paper and pencil versions of standardized tests will still be allowed for a few years. The spring of 2018 is when the state wants all students able to take the state tests on computers.

Detroit News article on issues in moving to online testing