Veterans Honored on the Big Screen through Student Documentaries 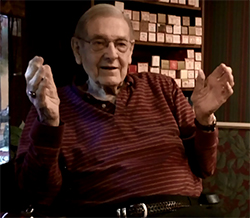 Veterans’ stories from World War ll and the Korean War premiered on the big screen during the recent Red Carpet Event at Wealthy Theater. One Hundred students from Kent Innovation High School produced documentaries with footage from interviews they conducted with 25 veterans, which were debuted to the public along with veterans and their families.

The veterans also brought memorabilia and photos from their time in the service to the interviews, some of which got used in the documentary.  “This generation will be gone in the next ten years,” said Trevor Muir, Innovation High teacher.  He and fellow teacher Danee Lucas facilitated the project and the event.  “These are stories and experiences no one else has.”

Going Beyond the Curriculum

The global studies class at Innovation High studies historical events in chronological order. This event reinforced what students were learning by providing insight into historical events in a way textbooks can’t replicate. “We want students to learn history so that it’s not repeated. This project is a motivator to learn the content,” said Muir.

Before the interviews were conducted, local filmmaker Aaron Carriere taught the class about crafting a story and how to ask the right questions. After they taped the interviews and other content, they made scripts and storyboards to dictate the flow of their documentary.

When asked about his experience working on the project, student Damian Leopold, from Kent Innovation High, said,”It was the greatest thing. These are some of the last people from the war and we got to talk to them and hear their stories.”

Rolling Out the Red Carpet

Students, staff and spectators lined up throughout the historic Wealthy Theater to welcome and honor the veterans with applause and cheers as they entered the screening room.  Artwork made by the students was on display, waiting to be presented to the veterans and their families after the event, along with live music from a student band that formed and rehearsed solely for the event.

The documentary was dedicated to, and began with stories of Ed Kaminski, one of the veterans interviewed, who died just two days prior to the screening.  During his segment Kaminski reflected on his time in Rome, where they caught whitefish in the river by throwing grenades in it. “Girls would come around and hug you and kiss you,” Kaminski remembered with a twinkle in his eye.

Donations were collected for the Grand Rapids Home for Veterans, and the event provided a memorable evening for all who attended. The documentary will be archived at the Library of Congress in Washington DC.

“It is an honor to be able to pass these stories down to future generations,” said student Damian Leopold.

WZZM Story on the event