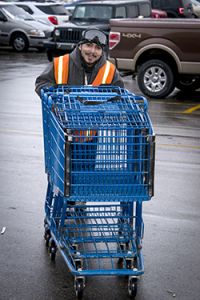 You can learn only so much inside a classroom, especially if you’re a young adult with special challenges.

At some point, savvy educators say, you need to bust out and immerse yourself in the real workaday world.

Joe Carlon and Michael Taylor are discovering what it means to make that critical leap – from the nest a comfy school provides to the scary environments that can define some workplaces.

But with help from staff and others who administer transition programs for the Kent ISD, chances are that Joe and Michael will soon be working full time for pay. “I’m here every day, and I haven’t been late even once,” says Michael, 20, as he wipes sweat from his brow.

It’s hard-earned perspiration, and something he embraces, part and parcel of working part-time at the Meijer store on Alpine Avenue in Grand Rapids.

A short hike to the northwest, in Sparta, Joe Carlon is engaged in a similar activity, stocking shelves and doing anything else necessary to make the dairy section flourish at Family Fare on State Street.

To be honest, he’d rather be playing video games, but deep down, he knows that gaining a skill in the retail world could be the key that unlocks the door to future employment.

Joe and Michael are part of an initiative called ACE, or “Achieving Competitive Employment.” It’s fueled by a grant from Michigan Transition Services Association and Michigan Rehabilitation Services. It benefits a dozen students with special needs who qualify for on-the-job training while they simultaneously finish high school.

It’s an intensive course in “giving students experience with things they might like to do, and seeing the reality of what it takes,” says Kim Norman, who developed ACE for a consortium of high schools in northern Kent County where she serves as a transition coordinator.

ACE, which commenced in March 2013 and will serve some 30 students before it concludes in June 2014, is just one of many post-high school transition programs in place throughout Kent ISD.

Some are “center-based,” in that they rely largely on classroom instruction. Others depend on real-life working situations and on-site collaborations with employers representing grocers, manufacturing facilities, restaurants and more.

Michael works four hours most weekday mornings at Meijer, then finishes the day at Northview High, where he’s a senior set to graduate this coming spring. Joe splits his schooldays between Sparta High and Family Fare.

“The intent of these post-secondary programs is to be targeted and intentional with regard to meeting the individual needs of young adults so that they can be productive citizens, employable, and living independently,” says Laurie VanderPloeg, Kent ISD’s director of special education and early childhood.

But it’s more than just prepping students for a job, she emphasizes.

In fact, three other “domains” are just as important as employment, and they focus on daily living, community involvement and further education.

The success of programs like ACE and its close cousins hinges on linking each student to a job that allows them to make the best use of their gifts.

In Michael Taylor’s case, for instance, he first tried his hand at assembly line work, and realized he was more suited to a job like the one he now enjoys at Meijer.

“I like helping people,” he says. “And I like it outside, even when it’s cold, so that’s a plus for me. And it’s a nice atmosphere, with a lot of nice people working here.”

Like others enrolled in the ACE program, Michael’s progress is monitored closely, in part by store administrators, and also by ACE partners like Leslie DeJong, a job coach and job developer for Goodwill Industries of Greater Grand Rapids, Inc.

Michael is scored in more than a dozen categories – everything from punctuality to how well he deals with instructions, deadlines and all the human elements that go hand-in-hand with working alongside co-workers and customers.

That includes being vigilant when it comes to shopping carts, especially when wind and a slippery parking lot can turn one into a battering ram. Michael lost his grip once, but learned a valuable lesson: Hang tight, and never turn your head.

Over at Family Fare, Joe is focused on rotating stock so that products closest to expiration are front-most on the shelves. But there are social elements to master as well, like establishing eye contact with consumers, and doing everything in your ability to steer them in the right direction when they’re searching for goods.

“I gave him a little pep talk on how to talk to consumers,” says Tim Koeze, store director. “And we’ve discussed how if he doesn’t know the answer, find somebody who knows.”

Koeze realizes the symbiotic advantages to the ACE program and efforts like it: “I think it’s a value for him and value to us, too.”

Steering young men and women with special needs into jobs is nothing new, but it’s become a sophisticated art that doesn’t rely on the same old touchstones. Consider, for example, that manufacturing jobs – the bread & butter opportunities of 20 years ago – are on the wane.

Also, only certain employers are willing to collaborate, the ones willing and able to devote their own staff and resources to the process.

And third, these are candidates with a learning disability or possibly autism spectrum disorders or a physical impairment, and they’re competing in an open market against folks armed with post-secondary degrees, who are seeking the same kind of entry level jobs to support families.

Indeed, Kent ISD provides services to students who exhibit any number of 13 different disabilities, in a state that is the only one to provide educational services to clients from birth through age 26.

More than 12 percent of students served throughout Kent County qualify for special services, according to state data. With a total student population of about 107,837 last year, that means approximately 14,012 students needed special education assistance.

Programs like ACE will survive as long as there are cheerleaders like Norman and VanderPloeg involved, but they’re constantly on the lookout for employers and agencies to step up as partners.

That’s the key to helping students earn not only a paycheck, but personal competencies, or, “soft skills” that include self-advocacy, time management, communications, self-esteem, social cues.

Some students, says VanderPloeg, “are just as challenged with those levels of skills as they are with folding towels or sweeping floors. So we need a high level of adult coaching – of mentoring – to keep those young adults going.”

As long as it’s not too clingy, right?