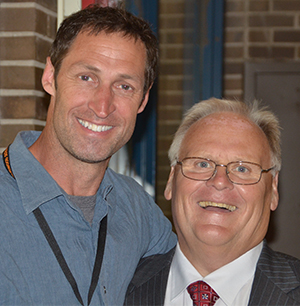 In the end, it was his loyalty for which he was remembered – to his faith, his family, his beloved alma maters, and to a community whose collective heart both broke and soared in celebrating the life of beloved Rockford school administrator Jamie Hosford.

Tears mixed with laughter last Friday in remembering the most decorated athlete ever at Grand Valley State University, and yet Hosford rarely made his sports accolades part of his personal baggage.

He was just too busy giving to get.

“The man cared,” said Rockford math instructor Joe Kleefisch, “and everybody knew it.”

“He was the heart and soul of Rockford.”

Hosford, 58, died March 4 after a two-year bout with cancer, leaving in his gentle wake a wife of 38 years, four grown kids, and an extended family that includes thousands in the Rockford district, where he served most recently as assistant superintendent of human resources.

“I personally loved Jamie as a brother,” said a choked-up Michael Shibler, Rockford’s veteran superintendent, who met Hosford some 25 years ago.

Shibler lauded Hosford for his endearing personal qualities and leadership skills, but like others who spoke at his service, arrived at the same bottom line: That nothing on this earth mattered more to Hosford than his family.

That included a son-in-law, Austin Bibler, who lost his father at a young age, prompting Hosford to take him aside and say, “I will be your dad the rest of your life. Don’t call me Jamie. Call me ‘Dad.'”

Hosford’s death at a relatively young age stunned those who didn’t know he’d been sick, including young teens – men now – that he coached in wrestling years ago.

At Grand Valley, a pall hangs over the campus while they try to digest the death of an athlete who won an unprecedented 12 letters while competing there in football, wrestling, baseball, golf and track & field.

There are football players in their late 50s who competed against Hosford, and still remember the damage that No. 32 inflictedagainst their defenses.  “The toughest ball carrier I ever tried to tackle,” former Ferris State University player Steve Grinczel said. “I’m still seeing stars.”

He was the attentive parent who might have read the riot act to a son or daughter on the brink, but always ended the conversation with “I love you.”

He was the thinker, the golfer, the traveler, the devoted husband who loved to belt out “You Are So Beautiful” to his one and only, Gloria.

When he stood in one spot for more than five seconds, he’d start to sway, and the very image of it made people laugh.

His handshake, meanwhile, made people wince: If you saw him approaching to shake your hand, said one fellow educator, “You better hit your mark,” or suffer the possibility of sprained fingers.

In a video featuring remembrances from Rockford school employees, they took turns embracing the Jamie they knew best.

Six women sang a homespun rendition of “I Did It My Way,” showing cameos of Hosford peeking out from beneath his desk, and in the next image, smooching a horse. 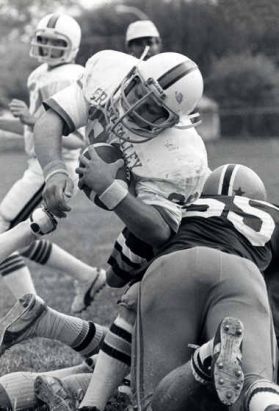 High school teacher Kris DeYoung rhapsodized about how Hosford had shared with him the joy of peanut butter slathered on pancakes.

Administrator Doug VanderJagt, tears welling in his eyes, acknowledged that since Jamie fell ill and recently retired, he regularly visits Hosford’s empty office. “I think about him every day.”

Michael Newell said that Jamie often reminded him how “Good things happen to good people,” and he used it as a mantra.

During Hosford’s 58 years, he cast a wide shadow and left a large footprint.

He grew up on Grand Rapids’ North End, starring in sports at Creston High School.

He went on to distinguish himself at Grand Valley, especially in football and wrestling, where he earned All-American honors and was named to the 1980 Olympic wrestling team.

Three years ago, he was inducted into the Grand Rapids Sports Hall of Fame, and he accepted the tribute in the same way he’d accepted all those before it – with uncommon humility.

At his visitation last Thursday afternoon and evening, the lines were so long that people had to be turned away. The church service was filled nearly to capacity. “This isn’t just the Hosford family grieving,” said Pastor Duane Klas. “He was big enough to touch an entire community.”

As people filed out and then over to Rockford High School for a luncheon afterward, more than a dozen easels remained in the front foyer of the church, all of them cradling photographs and mementoes of a husband and father and friend gone too soon.

Some of the most charming showed a young dad sitting with twin sons Dan and Tom in the bathtub, and few would argue that Hosford definitely looked sleep-deprived, if not downright overwhelmed.

There were snapshots revealing excursions to Florida, Alabama, Ireland, Italy, Aruba, Vegas and too many golf outings to name.

More than a few photos included long-time friend Steve Workman, who, when asked if there was even one thing Jamie did badly, thought a moment and then said, “He couldn’t count very well in golf. “

Workman marveled at the cross-section of attendants at his buddy’s funeral – Rockford’s city manager, its police chief, and University of Notre Dame Football Coach Brian Kelly, formerly of GVSU.

“Look at all these lives he touched,” said Workman. “And for Jamie, it was never a chore, but an honor.”

In lifting up his father, son Tom pointed out that his father’s funeral took place on one of the warmest days of this winter, and ventured that he’s now working alongside Our Lord for more sunnier days, in his new role as HR Director of the Guardian Angel Program.

In the next moment, Tom shared that his father embraced everything about his days here on earth.

“He loved life to the very end. He didn’t want to go.” 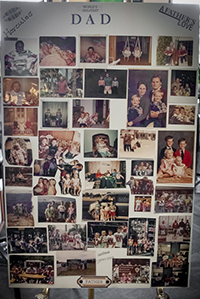 He died in peace, surrounded by the family he adored, leaving them and the rest of us to both grieve his passing, and consider the lessons left behind.

In casual conversations after the service, people admitted they were doing a personal “gut check” of their own life, with Hosford’s death prompting them to turn inward and ask ‘What kind of person have I been?’ and ‘How can I give more?’

Pastor Doug Bergsma characterized death as a cruel moment, but reminded his listeners that because Hosford was a believer, “He is now in some very loving arms…in everlasting arms.”

He also described Hosford’s new home as a place “beyond the sunset, beyond time and space.”

Indeed, that sounds like a beautiful realm, instantly far off, and yet not so distant that Jamie Hosford can’t still reach back to touch those he loves through the legacy he leaves, ever the educator, teaching us still.

(EDITOR’S NOTE: The Hosford Family Excellence in Academics and Athletics Endowed Scholarship has been founded to assist graduates of Rockford High School who have excelled in academics and athletics and are bound for Grand Valley State University. To donate or request information, write University Development; GVSU; 301 Fulton Street; PO Box 2005; Grand Rapids MI 49501.)