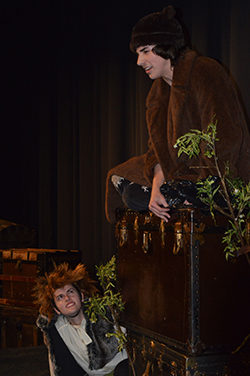 It was very important that everything come out of the trunks, Director Jeremy Schnotala insisted as his cast of Wyoming High School students scurried to their correct positions on stage. Umbrellas, balls, totes, hats and wigs – sometimes even people – all needed to appear like magic out of the dozens of antique trunks and suitcases of various sizes and styles that dotted the actors’ surroundings. Nothing could be laid around haphazardly.

Schnotala guided the cast of Wyoming Theater Company actors in turning chaos into a creative scene that worked like clockwork during rehearsal for “Trunks 2,” a show to be performed around a small audience with actors working directly out of an eclectic mix of trunks.

“Quicker!” he shouted as students dressed as dogs, cows and bears began to dance to the popular song, “What Does the Fox Say?” by Norwegian comedy duo Ylvis. One student hopped on top a large trunk while others danced nearby, hands out like claws, with the music declaring the Fox says, “Ring-ding-ding-ding-dingeringeding.”

“Too long,” Schnotala said, following up with lots of directions to make things go fast and smoothly.

On Stage with the Audience

Schnotala, who has taught at Wyoming for 20 years, is challenging his students to test their acting chops by performing three different shows, all series of one-act plays, for “Trunks 2,” a follow-up to “Trunks,” which he created and directed in 2008.

Two of the shows are for an audience of just 60: “Philosophy Night Coffee House Theater” is a night for deep thinkers, taking place in lounge-style setting where audience members will sip specialty coffee and nosh on pastries; “Animal Tales Dinner Theater” will involve shows with animal themes, while the audience dines on burritos and chips.

“Mashup General Admission” is a combination of favorite one-acts from each performance. 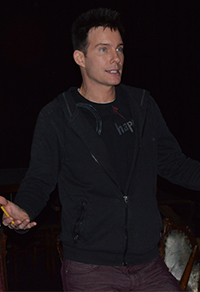 But he’s good at working with students on their level.

“I yell a lot,” he said with a laugh. “That’s always the joke, but I try to create a very comfortable atmosphere within which they cannot be embarrassed for breaking outside the box,” he said. “We do a lot of silly activities, and we do a lot of pantomiming and a lot of theatre games.”

He taught and directed at Wyoming Park High School before the consolidation of Wyoming Park and Wyoming Rogers high schools occurred last school year, doubling the pool of drama students. For big shows, up to 150 students are involved.

For years, Schnotala only directed plays, but made his mark on the musical

scene as director when Wyoming Park became the second high school in the nation to produce the Broadway musical “Cats” by Andrew Lloyd Webber in 2007.

Since then he has brought to the stage big musicals like “Willy Wonka,” “Pinocchio,” and “The Wizard of Oz.” The first performance of the combined Wyoming Theater Company was “Beauty and the Beast,” followed up by this fall’s “Spamalot”.

But the spring play is all about working on a much smaller scale.

“Trunks” and “Trunks 2,” which he created, allow students to choose the one-act plays and cast themselves.

“For this season, I wanted to give the acting group a change to take a leadership role, and choose the works themselves and decide what they wanted to act and perform,” he said.

Donations from 40 different businesses in the community include food and prizes. Profits will help pay off debt from “Spamalot.”

‘Unique and Intelligent’ But a Little ‘Scary’

Schnotala is frank in his approach and demands a lot, said actor Julia Glynn, a senior, but the cast always delivers in the end because of it.

“He’s the most unique and intelligent person, but he’s very, very harsh. He pushes you,” she said.  “Oh my goodness…He’s probably the person I rant about the most, but the one I come to the defense of the most.”

“He pushes us really hard and after a long day you just want to go home, but in the end you realize it’s all for the best because it makes you better at what you do on stage,” she said.

The cast is like family for Junior Gabby Huizinga.

“I kind of think of Jer as my uncle,” she said. “Even though sometimes he’s a little hard, I know he cares about all of us…He’s helped me with my confidence a lot and my stage presence and fully getting into character.”

“When I first met him he was probably the scariest person in the world,” said junior Olivia Hamilton, noting that he has an honest approach that inspires students to do better. “He’s really nurturing in a weird way.”