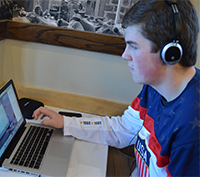 While East Grand Rapids High School teacher Brandon Oldenbroek lectured in his AP Psychology class, senior Julian Lipton sat in the front row with the latest in wearable technology on his face.

A short walk away inside Gaslight Village’s Starbucks, seniors Jack Ruppert, Trevor Deimel and Caroline Knooihuizen pulled out their laptops to watch the live broadcast of Oldenbroek teaching, recorded by Julian’s device.

Welcome Google Glass, the latest, perhaps most space-age piece of technology yet, to a school environment where laptops, iPads and Smartboards are now integrated into all types of learning.

Google Glass has a head-mounted display with a small prism in the corner where a computer screen is projected. It works by voice command, snapping a photo, recording, searching the Internet, providing directions and more. To activate, users say, “OK, Glass.”

The district purchased the device through the Glass Explorer Program, which allows people interested to use Glass before it is widely released for consumers. The $1,600 device was funded by the East Grand Rapids Schools Foundation and district funds.

Oldenbroek said he was interested in testing its applicability in the classroom. He said it’s a flexible option to meet students where they are at.

“From my end, it doesn’t change the way I teach at all. It’s very low maintenance,” he said.

Class in session for snow days?

Accompanying the seniors was Director of Technology and Assessment Doug Jenkins, testing Google Glass for the first time with students off the district network, who logged in using their Google Plus accounts’ Google Hangouts feature.

Ongoing debate in education focuses on the merits of online learning versus seat time, where students are physically in class. The technology offers a good compromise, he said.

“It has a lot of possibilities. I love the online teaching where it’s live and you’re with people,” he said. “You’re virtually there,” Jenkins said.

While students groaned at the idea of virtual class during snow days, they said they would definitely tune in because of the value of hearing class, rather than trying to play catch-up later.

In Starbucks, Caroline pulled up a Powerpoint to accompanying the lecture, mentioning the possibility of starting a Google Doc to work on notes with her classmates at the same time.

“It’s definitely interesting. I think it’s really cool that if you are home sick you can still see class,” Caroline said. “It would definitely be helpful with discussion groups… I think it will help overall communication between teachers and students because it opens up pathways for communication outside the school.”

Also, instead of raising their hands to as a question, if Oldenbroek was wearing Glass, students could send him an e-mail and the question would pop up in front of his eye.