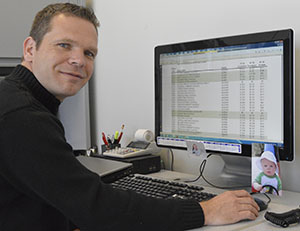 Ramsey doesn’t like the trend. She’s afraid it will continue if the state doesn’t start giving more funding to its public schools.

“The one-on-one time those kids are getting with the teacher is greatly diminished,” Ramsey said of Abigail’s class at Lakes Elementary, noting Abigail has art only once a week, instead of twice, as son Michael did when he was in first grade.

Her concern about the quality of her four children’s education has pushed Ramsey to the fore of a statewide effort to increase state school funding. The parent chairwoman of Friends of Kent County Schools, a grassroots advocacy group, Ramsey said Gov. Rick Snyder’s proposed budget increase for schools is appreciated – but is not nearly enough.

“Our schools are lean and mean,” said Ramsey, a high-energy Rockford grad who tours the state giving pep talks to other parents. “They’ve done everything they can do. It’s time for us as parents to step up and do everything we can for them.

“Parents across the state are saying the same thing: Our kids are all suffering.”

So are school district budgets across the Kent ISD, officials say.

While Ramsey and school leaders are pushing a better-funded alternative to Snyder’s budget, superintendents and finance officers brace for its impact on them. Absent changes in the funding package, school boards will have to adopt budgets by June that reflect Snyder’s modest increases.

While the governor has touted his proposed $332 million increase in K-12 spending as a nearly 3 percent hike, local officials say it would amount to less than 1 percent once retirement costs are factored in.

A major factor in the school revenue shortfall: Since Snyder took office in 2011, the state’s minimum per-pupil grant has fallen from $7,316 to $7,076 in the current year.

Districts have coped by making major cuts in custodians, building operations, business offices and other areas, largely by privatizing services. The cost of teachers’ wages has gone down slightly but their health and retirement costs are up by nearly $20 million, or 15 percent.

Districts have made ends meet partly by digging more deeply into their reserve funds, which they normally try to keep above 10 percent as a savings cushion. Last year only two of the 20 districts were below 10 percent; this school year, eight are, including Grandville at just 4.8 percent and Rockford at 5.4.

“That’s what all districts are faced with,” said Hagerty, who is also acting business manager for Thornapple-Kellogg Schools. “If we’re not properly funded, where else do we go?”

The district is requesting a $6 million bond issue on May 6, along with five other ISD districts seeking bonds or sinking funds for building and technology upgrades. But those funds can’t be used for teaching and operational costs.

The situation is even grimmer in Wyoming Public Schools, where officials face a deficit of more than $2 million.

From where Superintendent Tom Reeder sits, the numbers don’t look good even with an additional $440,000 in state funding. That only reduced his deficit from about $2.5 million, based on net increased funds of $54 per student.

The district’s woes stem from several sources: being among the state’s lowest districts in per-student funding; a continuing enrollment decline including 240 fewer students this year; and two bond request defeats last year that would have funded about $50 million in building improvements. Now the district must repair aging buildings and replace buses out of its operational dollars while trying to minimize classroom cuts, Reeder said.

“There will be less people working here unless something comes through,” he said.

Since 2008-09, Wyoming has lost $8.2 million in total revenue – by far the largest loss of all Kent ISD districts. Reeder said the district was hurt by a $470 cut in per-student funding in 2011-12, along with the loss of students to charter schools and families opting for other Schools of Choice. The district combined high schools and made “devastating cuts” including close to 90 employees, Reeder said, while class sizes grew.

Many legislators are doing the best they can at funding the state’s many needs, Reeder conceded, but said districts like his need a major boost in funds to meet educational expectations.

Christie Ramsey agrees. That’s why the Rockford parent has been pushing for an alternative funding proposal called Classrooms and Kids.

Rolled out in late February, the proposal would provide schools with an additional $250 to $291 per student without raising overall costs. Instead it would divert $186 million from funds for specialized needs and programs.

Ramsey calls it a proactive measure rather than the usual complaints about under-funding. She has pitched the proposal to legislators and says she is “hopefully optimistic” they and Gov. Snyder will support it at least in part.

“There’s a lot of pressure out there,” Ramsey said. “It’s an election year. I don’t think it would be in anyone’s best interest to go against increasing education funding. Bottom line: I think no matter what, they will increase funding.”

Chris Glass, director of legislative affairs for the West Michigan Talent Triangle, a consortium that includes Kent, Muskegon and Ottawa area ISDs, has been putting the proposal in front of legislators around the state.

He said it is “very likely” that portions of the proposal will be incorporated into the final school budget package as legislators craft their spending bills this spring — and that local superintendents eventually will get the true 3 percent spending increase they want.

“I think that’s the best case, and doable,” Glass said.

Christie Ramsey hopes for that and more, for the sake of her children and others.

“Sometimes I do get frustrated,” she said. “You just have to keep trying. Someday it will happen.”