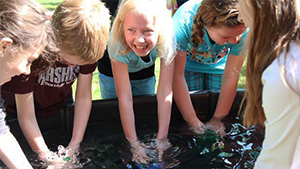 A sign on a village well more than 7,000 miles away in Ethiopia says “Kettle Lake Elementary.” It’s a little sign, but represents a big deal for villagers who used to walk a couple of miles to get a jug of dirty water.

Caledonia’s Kettle Lake Cougar Kids Care Club, a service organization at the school, started a project to raise money for the well in May 2012 for its annual global fund-raiser. They worked with Charity: Water, an organization which brings clean water to villages.

Besides providing the village with a well, students learned about a world they don’t live in.

In the Mai-Seto community where the well was built, women and children walked up to two miles a day just to get five liters of water for drinking, bathing, cooking and anything else it was needed for. According to Charity: Water’s website, that water wasn’t safe to drink and often made people sick. Thanks to the new well, a family now gets up to 15 liters of safe water every day

“I felt bad for the women andchildren, knowing that they could die from drinking the dirty water,” said Eliza Henry, now a seventh-grader who attended Kettle Lake when the project started. “I wanted to help them.”

Club members realized raising $5,000 was going to be a bigger challenge than they’d taken on before, so they asked the whole school to help.

“We decided, hey, let’s go for it, let’s have the kids think outside their world a little more,” said Jaime Blunt, a Kettle Lake Cougar Kids Care Club leader.

The National Junior Honor Society at Duncan Lake Middle School, where some of the students in the original group went on to, also helped raise money.

A Water Walk got the fund-raising started. Students collected pledges for walking around the school track carrying liters of water “so they would get a tiny taste of what it would feel like to be the women and children who have to walk for hours every day just to get dirty water,” Blunt said.

“We all take water for granted, never thinking about what it would be like to not be able to turn on the faucet or take a shower.”

Fifth-grader Sam Blunt said what he and his classmates did made him feel grateful about having a faucet in his house. “I can get a clean drink anytime I want,” he said.

Brayden LaCroix, a third-grader, was primarily interested in learning about another country when the project started. He did, but on top of that he got a life lesson. “Problems that I think are really big, aren’t that big when I look at all of the problems the people living in that village have,” he said. 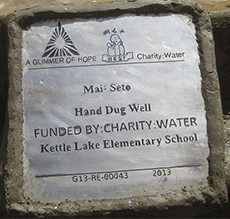 The Well is Working!

In January, more than a year and a half after the project started, students learned the well was finished. Charity: Water posted pictures of villagers using it online and provided GPS coordinates for students to locate the village. “I think they were really excited to hear the report back,” Blunt said, adding some asked if they could do it again because they now had a big desire to help people.

“It takes a community to build a well, even if that community is thousands of miles away and consists of elementary students,” club leader Blunt said. “It shows what you can do if you really set your mind to doing it. It’s something you can accomplish as a team.”

Next year, the team is thinking about raising money to build new roofs on homes in Zambia.