After inspiring classmates to reduce electricity use “one pedal at a time,” a team of Byron Center West Middle School eighth-graders felt compelled to help communities around the world, filter by filter.

Eco Challenge team members — “just nine kids with ideas,” as they call themselves — have won $40,000 in prize money from the Scholastic Lexus Eco Challenge for their work to help the environment, their school and people in faraway countries.

“It’s more about helping other people, and we had fun doing it,” said team member Zoe Christensen.

The contest is held by Scholastic publishing for students to implement projects to help the environment. Sixteen teams nationwide received first-prize awards of $10,000 and then had the option to vie for a grand prize of $30,000. West Middle competed against 31 other teams for the grand prize.

West Middle students won a $10,000 first prize last fall for their first project, which provided two pedal-powered generators for students to charge their laptops rather than plug in to outlets.

To follow up, students decided to take on the global challenge of bringing clean water access to parts of the world where it is scarce. The team was awarded the $30,000 grand prize for raising more than $1,000 for the purchase of water filters and a well for communities in Haiti, the Philippines and Kenya.

According to World Vision, 1,600 children under age 5 die each day from diarrheal diseases caused by unsafe drinking water and spread by lack of basic sanitation and hygiene. Clean water, sanitation and hygiene education are some of the most effective ways to prevent child disease and death.

“We live in such a good country, we don’t realize the work people put into getting clean water,” said Jordan Whitmore. “I’m filled with pride and joy knowing I’m helping people so they can live longer. I have more of a purpose in life than sitting and doing homework.”

Added Ashley Cyrus, “More schools should be involved with Eco-Challenge because not only can you benefit your own school, but you can benefit people all around the world.”

The team will split up the prize money: about $2,000 for each team member, $7,000 for the West Middle School Science Department, and a $2,000 grant for team adviser Justin Vande Pol, a middle school science teacher. 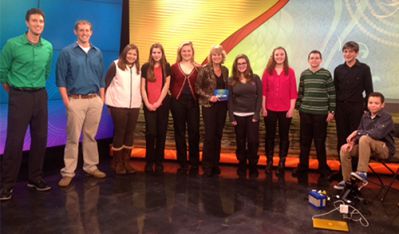 In 2010-2011 the team won $10,000 by raising funds to buy rainforest land to completely offset the Middle School building’s carbon footprint. They won again the next year by implementing new school recycling efforts, and by working to promote approval of the 2011 bond proposal. Funding from the bond paid for student laptops, which helped with the transition to a paperless system.