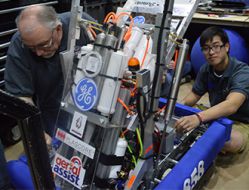 Huge blue and red medicine balls flew through goals, catapulted by quick-moving robots scuttling around the floor. The crowd cheered as high school robotics teams synchronized efforts to score the most points during a fast-paced competition at Grand Valley State University.

Surrounding the lively game, high school teams tinkered with their space-age looking robots in between matches, hoping last-minute maintenance would give their creations the best chance at adroitly tallying points.

For teams at the West Michigan District Competition for FIRST Robotics, it’s been an all-hands-on-deck approach to build speedy robots able to hoist balls high and aimed accurately.

“It’s just takes a lot of brainstorming,” said Allison Annable, a member of the Lowell High School Red Arrows team. “It gets frustrating at some points.”

Allison, a junior, and her 15-member team, finished 14th in the competition where 40 teams faced off to see whose robot was the best in battle.

The West Michigan competition at GVSU in Allendale was one of several district matches making up the FIRST Robotics Competition. The annual competition was founded in 1992 to help students develop a passion for science, technology, engineering and math (STEM) and consider careers in those fields. Approximately 68,000 high-school students from 17 countries participated in the 2014 competition.

The intense six-week robot build season, starting the first week in January, involves a student-led process to construct a robot designed to complete a specific challenge. Students are coached by engineers and other professionals in the science and technology industries. This year’s robots competed in Aerial Assist, a game involving launching as many balls into goals as possible during a two-minute, 30-second match. The matches involved alliances, with three teams working together on both sides.

“We took a long time this year to come up with the design,” said junior Jordyn Moore, a member of the East Kentwood High School 25-member Red Storm team, as her teammates readied their robot for competition. Mentors from GE Aviation, the team’s main sponsor, provided input during the process.

The eight-member Wyoming High School Demons team proved even a small group of students can build an impressive robot. Their creation’s release mechanism easily shot medicine balls toward the goals during competition.

“When you have enough people working together it’s fairly easy to come up with ideas,” said sophomore Dylan Kivenen, a member of the Wyoming High School Demons team.

“It gives the kids the opportunity to express themselves and be creative,” Tunnel said. “They are able to compete in a big competition. We have an eclectic group of kids. We find a place for everyone.” 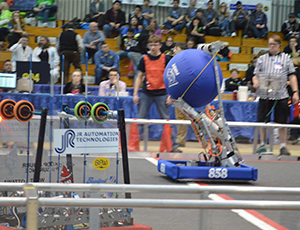 He said many students who gravitate toward robotics don’t necessarily do well in conventional classrooms, but creating a robot sparks creativity and appeals to their interests.

“The no-holds-barred and hands-on education allows them to really excel,” Cherba said. “This is about as intense a STEM curriculum as you can get.”