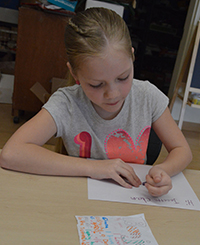 Student Kira Wilson laughed as her pal, Princessa, a student at Springforth International School in Accra, Ghana, greeted her. Princessa called Kira her “best friend in the whole universe.”

The 100 Byron Center third-grade students are getting to know 30 students in Ghana through letters and video recordings shared between the schools. Ambroso and her longtime friend,

Courtney Young, who teaches art at the African School, started the correspondence as a way to make overseas connections.

Third grader Joshua Hager said he enjoys writing to his African pal, Beverly. “It’s kind of fun to have a friend far away,” Joshua said.

Students recently got to work responding to letters received from their pals that included lots of details about favorite things. Third-grader Fiona McGhee read her pal Janette Champion’s list of things she loves, and began her response with, “I have a lot of things in common with you.”

“I also have one dog. I’m nine. I like mashed potatoes. My favorite activity is dancing and I like to go to the beach in the summer,” Fiona said. “It’s all the way across the world and we are friends.”

The pen pal friendship is one of several events tied to Africa involving Countryside students and teachers that have recently unfolded.

In second-grade teacher Heidi Morrell’s class, students are donating toys to children in Rwanda where classmate Levi Green is going with his parents, Dr. Joel and Paula Green, and two sisters.

Dr. Joel Green is a local surgeon who travels to Rwanda with the organization World Medical Mission, the medical branch of Samaritan’s Purse, a Christian humanitarian organization. He works in a rural hospital in western Rwanda called Kibogora Hospital.

The class has compiled boxes of small toys like balls, games and cars to donate. Levi, who has been to Rwanda twice with his family, said children often play with sticks, rocks and old wheels because they don’t have toys. He knows the kids will be “really happy to get the toys,” because he’s taken some donations before.

In connection with the Green family’s trip, members of Christ Lutheran Church in Wyoming, are donating suitcases filled with items needed in Rwanda. Suzanne Snider, president of Parents At Countryside, is involved in the effort. 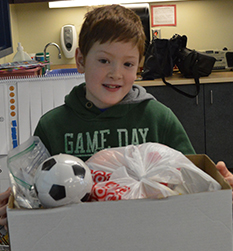 In yet another tie to Africa, third grade teacher Cindy Siebers is among 20 Byron Center teachers leaving for Zambia in June for a two-week professional development exchange with 150-200 African teachers through the Teachers Helping Teachers program. They plan to spend time observing schools and at teacher workshops to learn from each other.

“I look forward to sharing what I learn there with my kids next year,” Siebers said.

Countryside Principal Jolynne Dobson said Africa stood out as natural theme for “March is Reading Month” because of all the connections being made. Events during the month have including a presentation by Dr. Green on Rwanda, and many cultural activities.