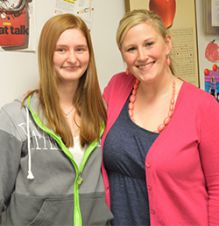 Sadler teaches “Healthy Body, Healthy Mind,” an elective class she started this school year focused on nutrition, fitness and other issues that affect health and well-being. It has inspired Taylor to exercise regularly, pay attention to what she eats and help her family make healthy choices.

“I’m moving to my apartment this summer,” Taylor said. “The class has been a great way to see what’s healthy.”

Sadler’s course had such an impact on Taylor that she wrote a winning essay nominating Sadler for the “My Favorite Teacher” award at Barnes & Noble. They were recently honored at the RiverTown Crossings Mall bookstore.

Sadler, who has taught at Kelloggsville High School for nine years, said she started the course because many students aren’t aware of how to make healthy choices.

“I felt there was a huge need for a class like this,” Sadler said. “I know personally in high school I didn’t understand how important it was to make a healthy choice, and I didn’t even know what a healthy choice was. I wanted to be able to introduce this class to the students so they would have information they could take with them outside of school and after school’s over.”

She teaches students about being true to themselves and treating their mind and body with respect.

“I am constantly reminding the girls that we aren’t striving to be skinny. We are working on being healthy — one meal at a time.

“I teach them how magazines Photoshop men and women. I hope they learn that perfectly tanned skin, sparkly eyes, white-as-cloud teeth etc. is not natural and they cannot and should not try to live up to that ideal.”

Taylor said she’s learned about food labels and better alternatives to not-so-healthy foods. She’s passed the information on to her mother, and they’ve started working out together by kickboxing and exercising at the YMCA. She’s even inspired her 17-year-old brother to give up soda.

Taylor, who plans to major in psychology at WMU, said Sadler has even got her thinking about career choices. She hopes to someday work in the health field with teenagers.

Sadler’s course consists of three days a week of working out and two days learning about nutrition. Building awareness is a huge part of it. Students set workout and other health-related goals.

Sadler teaches students that popular snacks such as Hot Cheetos are void of nutritional value and contain unhealthy additives. She shows them better options such as seasoned oyster crackers.

“They’ve still got the crunch and zest, but it isn’t Hot Cheetos,” Sadler said.

She’s shown them how to load smoothies with fruit, yogurt, spinach and kale, “which I make every day,” Taylor said.

The course also addresses depression and self-esteem, which Taylor said has helped her personally. Students post affirmations on their lockers such as “Stay Strong and Focused” and “Don’t Let Anyone Get to You.” Taylor also places the messages on her mirror at home. “I’m actually really shy, but I’ve opened up a lot more,” she said.

That’s what Sadler likes to hear.

“I hope to help instill and grow their feeling of self-worth so they can better deal with the pressure of being a teen,” she said. “I hope that confidence carries them into adulthood so they can be positive, influential, strong-minded individuals in our community.”

Sadler is concerned district budget cuts will eliminate the course for next school year, but she already sees its benefits beyond the classroom. Many students’ parents have told her they are making better choices because of information their children are sharing.

“During conferences I had a chance to talk to so many parents, I would say 95 percent of them said, ‘My child has told me to stop drinking that pop or put down that candy bar.'”

Sadler was among 12 Kelloggsville High School teachers students nominated for the Barnes & Noble contest. Principal Jim Alston said the many nominations are a testament to the relationships developed at school. 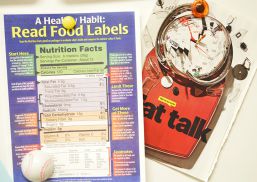 “For students to take the time to nominate and write an essay about a teacher, there must have been a connection between that student and their favorite teacher,” he said.