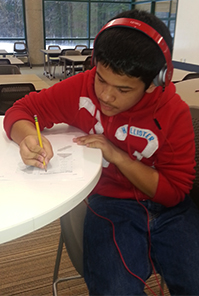 Editor’s note: This is the second in a series on the difficulties students have learning math, and what methods some schools and teachers are using with success.

Comstock Park High School Algebra 2 teacher Dave Staublin sketched a plain cylinder on a whiteboard. Next to that, he drew a tiered wedding cake.

Which math problem requires deeper thinking? A) Find the area of the cylinder or B) How much frosting is needed to decorate the cake?

Answer: Definitely B), Staublin said, pointing out questions that naturally pop up when students consider how much frosting a cake needs: How thick do you want the frosting? Does the cake have layers? How much frosting typically gets left on the sides of the cans?

While Staublin is challenging students to dig deep into their frosting computations, successes in math have occurred building-wide. A 10 percent jump in the number of students passing algebra and an astounding 99 percent success rate in Algebra 2 have Comstock Park administrators pleased with how things are adding up.

The addition of a high school Pre-Algebra class and a teacher assigned specifically to help students keep on pace are contributing to better results. But another factor in the equation is that math teachers like Staublin are ditching the traditional, plug-in-numbers-to-a-formula approach in favor of methods that get students considering how math is used in real life.

Staublin, a former engineer who has taught math for eight years at the high school, is helping students apply algebraic formulas to things they can envision. Problems involve many possible variables.

“This is new for me this year,” said Staublin, who has attended professional development sessions at Kent Innovation High and other forums to learn teaching methods based on principles outlined in the Common Core, an initiative set for classroom standards nationwide.

“The engagement level is much higher and student interest is better,” he said.

For the 2012-2013 school year, administrators added Pre-Algebra as a freshman course for students considered at risk for failing Algebra 1 based on their ACT Explore score, an assessment given in eighth grade.

The average success rate in Algebra 1 prior to the 2012-13 school year was 70 percent.  That rate has increased to about 80 percent, he said.

“What’s been rewarding for me is not only have we increased the success rate in the freshman class in Algebra 1, but that’s contributing to some of our other classes in terms of increased success rate,” said Principal Steve Gough. “Of students that took Pre-Algebra last year, only about 12 percent have failed their math class in the first semester this year – so 88 percent are back on track in the sophomore year.”

In geometry, which students typically take sophomore year, 83 percent of students passed, and in Algebra 2, typically taken by juniors, more than 99 percent passed.

“Algebra 2 traditionally would be one of the highest failure rates in the building,” Gough said. “I would say Algebra 2 is the most challenging content required of all students.”

A new standards-based grading system in Algebra 2 has also contributed to improvements. Students have the opportunity to go back and demonstrate concepts they at first didn’t master through projects, and test until they do. An understanding of all content to a basic level ensures a student is prepared for the next-level math class.

Math teacher Cindy Overbeek is assigned to work with students who need extra help. She meets with them individually during the day and after school, presenting different ways to figure out problems until things make sense. Once students really consider a math problem, they tend to figure it out, she said.

“They usually can talk themselves into the right answer,” she said.

When Gough started as principal for the 2011-2012 school year, he and staff members started looking at course failure rates and how to address them. They began a new data system to track eighth-graders’ math performance.

“What we found is that pretty accurately we could predict who was going to fail Algebra 1 and who was not based on their (ACT Explore) scores and classroom performance in middle school,” he said. “If we know that, if we can predict that, wouldn’t it make more sense to do something before they fail Algebra 1?”

Now administrators use data beginning in seventh grade and identify students who could benefit from Pre-Algebra their freshman year.

In Staublin’s classroom, students work on problems without much background information, allowing them to consider different possibilities. One recent task was to prove or disprove an advertisement in support of neutering and spaying that claimed one un-spayed female cat and her offspring would produce 5,000 cats in two years.

“The answer was highly dependent on certain assumptions,” Staublin said. “What that forces the students to do is figure out the facts they need. … Kids have risen to expectations. The work they are doing is more complex, some people might say more difficult.”

“He does a lot more projects, which lets you learn more and think a lot more than learning out of a book,” Jared said.