They called themselves Hunger Heroes as these Rockford first graders began fundraising to help feed other students in Haiti. A first-grade class at Lakes Elementary conducted a read-a-thon to raise $592for a K-6 school in Port au Prince, which provides food and medical care as well as education to its 189 students.

The Rockford students set out to raise enough to feed all of them for one day. Instead, they raised enough for four days. They also collected five soccer balls, 10 jump ropes, sidewalk chalk and crayons. Christine Pitch’s kindergarten class also pitched in by raising $152.10. 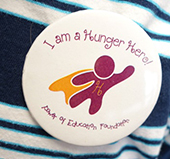 he supplies are going with a medical team to Haiti in late April, along with a colorful book students made to introduce themselves. In it one student wrote, “I learned that I can make a difference to the hungry kids out there and I can change the world.”

“They really learned to see beyond our world,” teacher Erika Koster said of her class. “They realized there are people out there that struggle, and there are little things we can do to help other people out.”

The donations were made to the Power of Education Foundation, a Grand Rapids-based organization that runs the school for impoverished Haitian children. The group also seeks to raise awareness among U.S. students by connecting them to service projects such as hunger relief for the Haitian school. students and staff at the school receive free breakfast and lunch each day. 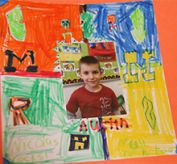 Koster made Hunger Heroes buttons for her students, some of whom continued to wear them long after the fundraiser. “They’re so proud of what they did,” Koster said.

As for the Haitian children, they sent the Rockford class their thumbprints in the shape of a tree. On it they wrote, “Thank you for helping us grow.”