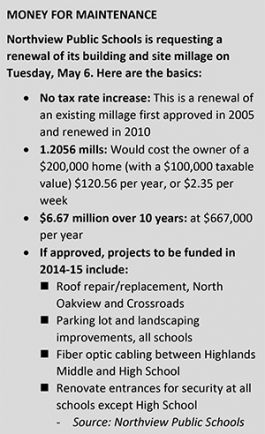 The heart and soul of a school is the instruction that goes on inside it. But just like a family’s home, a school building needs to be fixed up from time to time.

That is what Northview Public Schools are asking district residents to pay for with an upcoming $6.67 million request. Voters will decide May 6 whether to approve a 10-year building and site millage renewal yielding $667,000 per year to repair and improve buildings and grounds.

The 1.2056-mill levy would fund a range of maintenance, repair, technology and safety projects. It would not raise residents’ tax rates, calling instead for a renewal of the levy approved in 2005 and renewed in 2010.

From new or repaired roofs and repaved parking lots to new fiber-optic cabling and more secure school entrances, the funds cover projects needed to keep buildings open for learning, officials say. If they are not approved, the district would have to use operational funds to pay for them, Paskewicz said.

“We can’t let roofs leak. We can’t let windows remain broken,” he said, adding the district would “have to cut staff and programs” to meet those needs if the millage failed.

Repair Now to Save Later

Under the original millage approval and renewal over the past 10 years, 173 projects have been completed. The May 6 renewal would continue to repair and improve buildings that are more than 50 years old. By requesting a 10-year millage, the district can plan out a maintenance schedule that fixes problems before they get worse, officials say.

“You do the repairs when they’re less costly,” Paskewicz said. “Rather than waiting for the roof to leak, you repair it.”

The bond also would pay for more secure entry ways at all schools except the High School, which is already undergoing renovation and expansion. The entry ways would direct visitors into the main office before they were permitted to enter the hallways.

Though voters approved the 2010 renewal by a comfortable margin of 1,408 to 451, Paskewicz cautioned against complacency.

“We would say to the community, ‘Don’t think it’s just going to happen. If you want this to pass, you need to go to the polls.'”