Teacher of the Year Devotes 35-year Career to Kindergartners 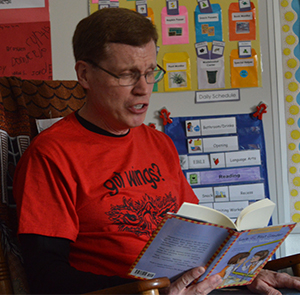 It’s just after recess at Kent City Elementary School. A couple dozen students return to Dan Crofoot’s kindergarten class. They’ve heard a visitor is writing about their teacher, and they look around wide-eyed.

Unprompted, they begin talking over each other about Mr.Crofoot, “the best teacher in the world.”

“He makes us smarter and he makes us laugh by doing silly things,” said Cooper Stinson.

“He does funny things and he makes us laugh.” said Karley Eager.

The eager students all want to keep talking. They are the latest crew of 5-and 6-year-olds learning to read and write from Crofoot, who has taught kindergarten for 35 years, 28 of them at Kent City.

But it’s story time, so Crofoot directs the children to sit on a rug in frontof a rocking chair and he begins to read. Crofoot is soft-spoken and kind, colleagues say. The children gravitate to him.

“He is an inspiration. He is very patient with the kids. He brings leadership and knowledge to the curriculum, the classroom and the school,” said Barb Taylor, who has taught kindergarten alongside Crofoot for 27 years. “He is so kind and has good heart.”

Crofoot said he learned kindergarten the right fit for him since when he was a high school student at Sparta High School and had the chance to assist in a kindergarten class.

“I really found that to be a lot of fun,” he said.

He loves guiding the 5- and 6-year olds from the beginning of the year when they are learning rules and routines to writing and reading, adding and subtracting as they head to first grade.

“There’s so much growth they make in the kindergarten year,” he said. “Their minds are open to learning, and they love it.

“I think it’s the enthusiasm that these children come to school with. They love school; they love their teacher. They’re the ones who groan when you tell them there’s going to be a two-week Christmas vacation because they just want to be here,” he said.

Crofoot, a graduate of Calvin College, decided young that he wanted to become a teacher.

“My parents told me that as young as 3 years old I said I wanted to be a teacher. I was always pursuing that goal.”

The job has changed over the years. Thirty years ago, the kindergarten class focused on one color and one letter a week. Now, there are a lot more expectations, he said. The students not only know their alphabet, some can write a complete letter – the kind that starts with a greeting and ends with their names.

“Things we’re doing now were first and second grade skills,” he explained. But students are meeting the new goals in today’s all-day, everyday classrooms. Pre-school and other early learning experiences have prepared them, he said.

“I think as the expectations have been raised, the kids are ready for them,” he said. “I never want to sell a kid short and think they aren’t capable of what is expected of them.”

He said Kent City’s close-knit staff and community have been a second family to him since both his father and mother died.

He said he is very humbled and appreciative to receive the award. “There are so many elementary teachers that do a good job,” he said.

Working and learning together