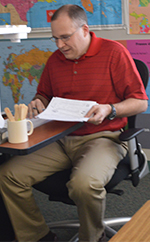 Editor’s note: This is the third in a series on the difficulties students have learning math, and what methods some schools and teachers are using with success.

“Here you go,” he started, moving his pen down one student’s test paper projected in front of the class. “C, D, B … oh no, she didn’t answer that one!”

The anticipation built during the Checking Party, the intense event when Pullen grades the tests.  Lakeside was running a close second behind IQ Abacus Math and Language School, in Tempe, Ariz., which scored 100 percent during the first two rounds. If that team fell short in the third round, Lakeside could take first prize. The team score is determined by adding the top four scores.

One by one, Pullen tallied results. Total points climbed.

Students went wild, cheering, jumping up and down, hugging and punching the air in celebration. Though they ended up finishing second to IQ Abacus, they were just one point shy of three perfect consecutive team scores.

But Pullen saved Nick Collins’ test for last. As the only student to score 100 percent on the first two tests, a flawless final meant he was National Champion of the entire competition. Could he do it? Pullen read off the answers: “C, D, B …” He continued through 12 more problems.

Students jumped in a huddle on top of Nick.

After the excitement subsided and students left the room, Pullen, who has taught at Lakeside for 13 years, reflected on the team’s enthusiasm. He and fellow third-grade teachers Scott Mitton and Allison Porter work together to engage students in math with opportunities like the math team.

The results are impressive. 90.3 percent of Lakeside third-graders scored proficient in the MEAP math test last fall, well above the statewide score of 40.2 percent.

Of 63 third-graders, 44 choose to be on the math team. Fourth- and fifth-grade teams are just as popular. Students spend their recess time on math and cheer each other on while working to better their own scores. “The kids find it very exciting and motivating, but they are very supportive of each other,” Pullen said. 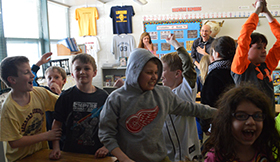 It could be Pullen’s excitement that’s so contagious.

A graduate of Thornapple Kellogg High School and Michigan State University, he is known around school as a math genius, a notion he smiled at.

“Math to me is a lot of fun because you get that immediate feedback of a right or wrong answer,” he said. “I personally have a knack for math. I enjoy it and I see the world mathematically.”

He said he likes watching students learn they can achieve a lot with numbers, beating their own scores on different games and tests.  Students compete in other challenges like tests timed by the clock — “They beg for time tests,” Pullen laughed — and use online technology for programs such as Greg Tang Math and IXL Math.

As a child, Pullen was moved grade levels ahead in math. But as a teacher he wanted to do things differently, teaching students of varying abilities in the same classroom. “I wanted to meet the needs of the most talented students and those struggling, all in a regular classroom,” he said. 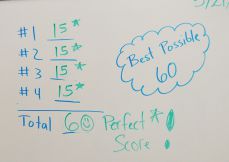 Pullen’s student teacher, Kristin Buzalski, said math was the subject she was most afraid to teach, but working at Lakeside has changed that. “He has shared his passion for teaching math and inspiring students to learn and keep going forward,” she said.

“Mark hooks the kid with his genuine nature and his caring,” she added. “From his standpoint, math is for everyone and it’s all around us.”

Liam O’Malley and Margaret Periard were right behind Nick with their final scores. Both only missed one problem. 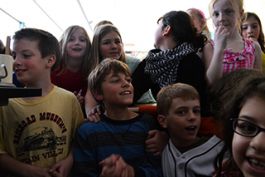 I like how you get to work together,” Margaret said of the math team.

Liam said the idea that doing math during recess is a bummer is wrong.

“The Checking Party is a really fun way to do math,” he said. “Mr. Pullen does a lot of other fun things in math.”