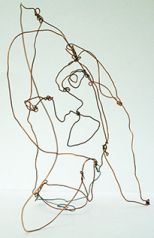 A Byron Center middle and East Grand Rapids High School student were recently awarded national silver medals in the Scholastic Art and Writing Awards contest, placing them among the top 1 percent of about 230,000 pieces of work submitted to the program. The students qualified for the national award by winning a top Gold Key Award at the regional Scholastic Awards event recently hosted by Kendall College of Art and Design.

While it was the young artist’s first serious attempt at creating sculpture, the piece won the national medal.

“I’ve always been more into drawing and didn’t know much about sculpture,” Mackenzie  said. “I really like sculpture now that I got to try it.”

Mackenzie is a student in art teacher Janine Campbell’s class and is in the after-school art class.

The winners of the National Awards are among the top 1 percent of all work submitted to the program, Campbell said.

Mackenzie, the daughter of Kelly and Randy Warren, also runs track and is on the Student Council.

She said she’s learned a lot from Campbell.

“She’s been very inspiring. She has so many different ideas and things that are always fun to try on your own,” she said.

“As a student, she is incredibly disciplined with acute attention to detail,” said Szpeig, who currently teaches Dills in advanced art. 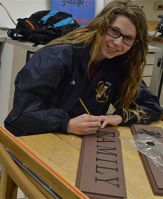 Szpeig said Alicia has a knack for using a variety of tools including small blades.

The students are invited to the National Award Ceremony at Carnegie Hall in New York City on June 6th, 2014. Mackenzie is is raising money to attend with her parents, and Alicia does not plan to attend.