From the Congo to Comstock Park: Refugee to Graduate with Near-Perfect GPA in Two Years 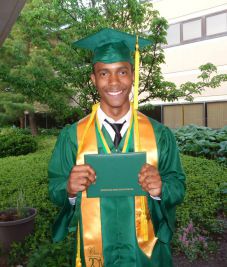 Editor’s note: This is the third in a series about students who have had to overcome unusual challenges and hardships to graduate this spring

When Gloire Rubambiza arrived in Comstock Park two years ago as a refugee from Africa, high school administrators told him it would be very difficult to graduate with the Class of 2014. He would have to complete all his high school credits in just two years to graduate at age

But what many students may have seen as a daunting task, Gloire saw as an opportunity.

After all, overcoming challenges is something Gloire has done all his life.

“I told them I am willing to really work hard to get to graduation,” he said.

Gloire completed online classes while completeing the Tech Center’s Information Technology program, along with regular high school classes, working tirelessly to reach his goal. He is now one of Comstock Park High School’s top students and will receive his diploma May 29 with a 3.92 grade point average.

“When we first looked at his transcript, we thought there was no way that he could possibly graduate, much less graduate on time,” Gough said. “Gloire is a high-achieving student who is a voracious learner. He has been an outstanding addition to our student body as he is an excellent leader and role model for his peers.” 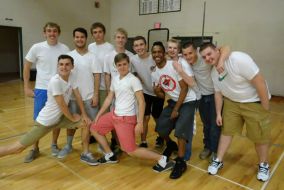 Growing Up in a War Zone

High school students study topics like civil war, political unrest, warlords and humanitarian crises. Gloire has seen these things up-close. He grew up in the Democratic Republic of Congo, the scene of one of recent history’s deadliest conflicts.

He said he remembers hearing gunfire in the night in 2007.

“There were rebels very close to my community,” he said. His parents, who are still in the Congo, wanted to move him to safety. “They were worried that the rebels would come into my city and take me.”

Gloire first moved to Kampala, Uganda, where he lived for three years with his sister and brother-in-law. In 2012, Zion Lutheran Church, in Comstock Park, sponsored Gloire and his sister, brother-in-law, nephew and a few other relatives of his brother-in-law’s to immigrate to the United States. He arrived in March 2012.

While in Uganda, Gloire, whose native language is Swahili, began to learn English. Today, he is fluent.

“It was pretty hard, but I had to adjust,” said Gloire, who lives with his sister and brother-in-law. “It’s been a great experience. I got to experience new language and cultures.” 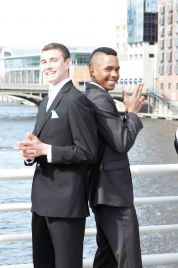 His enthusiasm shined in his work ethic and as a leader on the soccer field. Though he was ineligible to play on the varsity soccer team this year because of his age, he brought a true leadership quality to the sport last year while playing on a team that won the District Championship title, Gough said.

Gloire will begin attending Grand Valley State University this fall to major in computer science. He hopes to become a computer analyst and use his skills to improve technology and Internet access in DR Congo. “I would like to go back and start my own business in my home country,” he said.

Gough said he is not surprised Gloire’s life plan is tied to giving back. “He just has a knack for helping people,” he said.

But for now, Gloire said he appreciates the chances he has in the United States.

Gloire said teachers laid out the path for him to get to Graduation Day.

“This has become my new home,” he added. “Comstock Park is a really proud community. I like being a part of it.”

“I was very welcome here. I felt at home. All the resources were provided for me to succeed.