Educators Weigh in About Online Tests 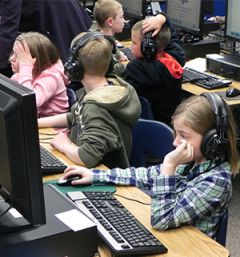 As Stacey Cooper’s second-graders at Sparta’s Ridgeview Elementary completed an online test, several of them waited patiently with hands raised. They wanted help from Cooper and Principal Marialyce Zeerip, who helped out during the school’s trial of new computer-based tests.

Sparta is participating in a statewide pilot of the Interim Assessment test, a non-mandatory test designed to gauge students’ progress throughout the year as well as field test new mandatory tests called Smarter Balanced, proposed to replace the decades-old MEAP.

“The questions don’t resemble anything from class so they can be confusing for students,” said Zeerip, explaining that students had to complete a practice test just to prepare for the real (albeit still a pilot) test.

Just a day earlier the state’s server crashed — only one of many glitches the school experienced during the pilot testing.

The tests are set to begin during the 2014-15 school year and have been aligned to the Common Core State Standards, which establish achievement goals for students in each grade level. However, state lawmakers have balked at funding the Smarter Balanced tests, citing concerns about content and schools’ readiness to use them.

Since the tests will be given in the spring, they will give teachers a better indication of students’ yearly progress than having tests in the fall, Zeerip said. She hopes students’ scores will be calculated and returned quickly so any needs can be addressed.

“Like any high-stakes test, it’s hard to know how good the data will be. It’s only a single snapshot taken on one day to measure a student’s achievement level,” Zeerip said.

Two classes per grade participated in the pilot testing. Despite only a fraction of students taking the tests, the process still has been disruptive, said Ken Willison, Sparta’s district assessment coordinator. “We’re finding out it’s going to be a scheduling nightmare once the whole district is taking the test.”

Willison said that the data management required for the tests adds a substantial workload for school administrators. The limited computer labs will be booked solid for weeks, which could become an issue especially for districts less equipped than Sparta. “We’re trying to keep the teachers from having to do too much extra work,” he said.

Despite these concerns, Willison said having computer-based testing allows for zeroing in on student needs so teachers can adjust their instruction for each student. “If the results can get back while students are still in class it could be a great thing,” he said.

Appleview Elementary Principal Mike Birely is excited about the potential of the new tests. “MEAP was not a good indicator of student growth, since they condense multiple years of learning and subjects into one test,” Birely said.

The Smarter Balanced test provides a measurement for each subject at each grade level. Birely expects that to be extremely useful when making adjustments to each grade level’s curriculum. Further, the problems aren’t just multiple choice anymore, he said, noting teachers have been incorporating complex multi-step problems into their instruction so students can be more prepared.

Sparta educators agree well-implemented testing can substantially improve student learning and class instruction. They said they are willing to try new things that may help students down the road.

Birely was especially optimistic: “It causes students to be more critical thinkers, which is necessary to prepare them for the jobs of the 21st century.”

A lover of family who learns from her students