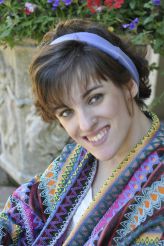 Editor’s note: This is the fourth of a series about students who have had to overcome unusual challenges and hardships to graduate this spring.

East Grand Rapids High School senior Rosie Accola has an easy smile and super-smart vocabulary. She peppers her sentences with words like “transcend,” “autonomous,” “synthesis” and “androgynous.” The young writer just knows how to find the words that work perfectly for what she’s trying to say.

Rosie’s love of the written word is leading her toward a promising future. She received a $90,000 Distinguished Scholar Scholarship to attend School of the Art Institute of Chicago, where she will begin this fall to pursue a bachelor of fine arts degree with an emphasis in writing. The play she penned, “Hex Girlfriends,” was one of six performed at the Young Playwrights Festival at the Wharton Center of Performing Arts in East Lansing.

Learning as She Goes

Rosie also has mild cerebral palsy, has battled depression and has a learning disability that affects her ability to do math. She and her twin brother, Frankie, were born 13 weeks early. She had a brain bleed as an infant that affected logical reasoning and spatial perception.

“It’s so exciting,” Rosie said. “I’ve been thinking about it for so long. Now that it’s here, I’m kind of bamboozled.”

Rosie, the daughter of Karen and Brian Accola, was diagnosed with cerebral palsy at age 2 and didn’t walk until she was 2 1/2. As a young child, she received therapy at the Conductive Learning Center in Grand Rapids.

Rosie brushes off the notion that cerebral palsy creates challenges for her.

“The only way it affects my daily life is I walk slower than most people. I have to use the rail when walking up the stairs. I can drive. I can hold down a job.

“I’m really thankful for the fact that my mother taught me to go for things in an autonomous manner,” she added. “With parents with kids with disabilities it’s easy to want to do everything for them. She’s a superstar.” 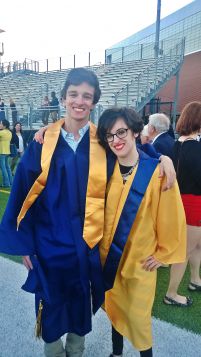 Screenwriting in Her Future?

Rosie said she is very interested in screenwriting and short fiction. She has a good start on pursuing her passions professionally.

Rosie wrote “Hex Girlfriends” for the high school’s 24-Hour Theatre performance, for which students write, direct, rehearse and perform one-act plays over 24 hours. Director Jane Hazle encouraged Rosie to submit her work to the Young Playwrights Festival, and it was selected as one of the top six for performance.

Hazle, who also taught Rosie in AP Language and Composition last year, said she is “bright and articulate and brings a fresh perspective to any situation. Her energy for all things creative is unbounded. Her poetry and plays reveal a smart, rollicking voice which captures the angst as well as the energy of being a teen in the 21st century.” 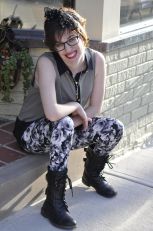 Rosie received a reward as a festival finalist and was assigned a professional theater mentor who helped bring it to the stage.

While she loves being involved in theater, Rosie prefers to stay behind the scenes.”With ‘Hex Girlfriends,’ it’s one of those things I never saw coming to fruition,” Rosie said prior to the festival. “I can’t even begin to fathom it. I don’t think I’m really going to process it until it’s all over.”

Rosie said she was diagnosed with depression during her sophomore year.

“It basically stemmed from anxiety and being unable to cope with that. I’ve always been a slightly nervous wreck of a child. I had to learn to transcend from my own head space and not just freak out about everything.

“I feel like I really have a good support system now,” she added.

For Rosie’s mother, Karen Accola, her daughter’s success is a joy to witness. “It’s the best thing ever,” she said. “It’s great after everything she’s gone through to see all these good things happen to her.”

From Sherlock Holmes to ‘The Spore’