Local Educators Get a Real Taste of Marine Boot Camp 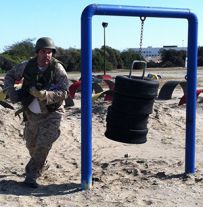 Kenowa Hills High School Assistant Principal Jim Smith had to stop thinking like a scholar to determine the quickest way to complete a mission with his group during a boot camp designed for teachers.

They were compelled to use all materials provided during a training session at the Military Corps Educators Workshop to complete the task of placing a fake explosive inside a small building with no roof, he said. “We tried to over-think things,” he said, describing how the simplest answer was to lift someone up and put it in place.

It was a week spent participating in something outside the norm for most administrators and teachers – U.S. Marine boot camp.

The journey went from the arrival, when they stood on the historic yellow footprints every Marine stands on before entry into recruit training, to a graduation ceremony. They chose from activities including handling and firing weapons, navigating through obstacle courses, problem-solving to complete missions and taking orders from military personnel.

Perhaps most importantly, they learned about the variety of opportunities available through the military, what basic training is like, and they returned to school prepared to help students interested in the armed forces, said Tom Reeder.

Educators are used to guiding students down the path toward college or the workforce, but most don’t have a lot of experience with the military, he said.

“I thought it was a great experience,” he said. “It’s an area I didn’t have a background in. I felt very humbled at how hard they work.”

The group was among 20 educators from Michigan who attended.

While it was a true-to-life session with the rigors of an actual boot camp, they could ask questions, listen to presentations, and watch presentations related to physical conditioning, life in general, weapons, maneuvers, and more training preparations, Reeder said.

Smith said he is now much better informed about what awaits students interested in the military.

“I was impressed with the wide range of opportunities there are for kids in the military, specifically in the Marines.”