Student Graduates after Riding Train of Death through Mexico 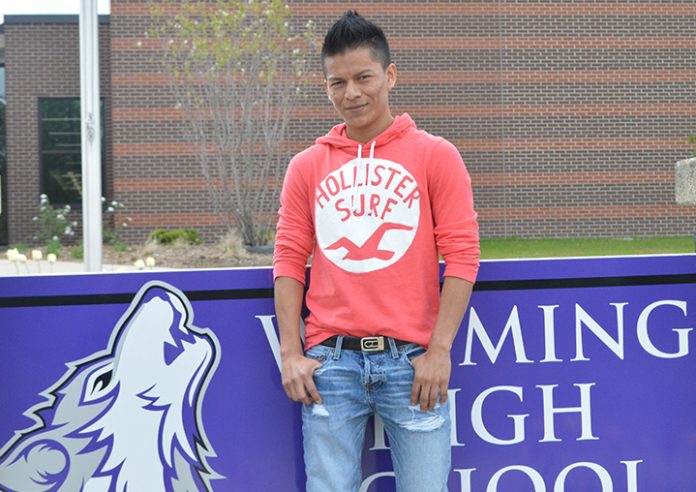 Editor’s note: This is the fifth of a series about students who have had to overcome unusual challenges and hardships to graduate this spring.

During the last day of his senior year at Wyoming High School, Jose Sanchez-Bueso completed his final chemistry exam, finishing off the semester with three A’s and two B’s on his report card.

He sighed with relief. He is a high school graduate.

The slight-framed teenager, his hair styled in a mohawk and wearing an orange Hollister hoodie, said he is “happy, just happy.” He came a long way before settling at his desk to learn math theorems, read Shakespeare and become the April Student of the Month.

Three years ago, at age 15, he was riding on top of a train en route to the United States from Chiapas, Mexico, on the second leg of his journey from his native country, Honduras.

He owned just the clothes on his back, went days without food and drank small amounts of water when he could get it on “El tren de la muerte,” or “The Death Train.” He hopped railroad cars; ran away from people in pursuit of him; was deported back home once only to begin the trip all over. He was caught and kept in a detention center.

Quiet and polite, Jose told his story when prompted. His eyes seemed to say he has many memories he couldn’t quite put into words.

But details emerged about the dangerous trek he faced as a boy trying to reunite with his brother Elmer, who took the same journey several years before. Jose’s mother died when he was just a young boy, and he dreamed of coming to the United States to work.

“I wanted to come here,” Jose said. “I didn’t have my mom, and I decided to leave Honduras.”

So he left behind his father, five sisters and another brother, facing incredible dangers over thousands of miles. “I was on the top of the train,” he said. “You can die there. … I didn’t know anybody.”

Tens of thousands of migrants, most from Central America, take the route each year. Many of them are children hoping to reunite with parents who have come to the United States to work and send money back to their families.

Migrants are kidnapped, raped, robbed, face extreme hunger and dehydration, and fall off the trains, slipping under the tracks, losing limbs or dying.

Jose’s first attempt to immigrate resulted in getting caught by officials in Mexico City who sent him back to Honduras. But he left again a couple months later, savvier and with money in his pocket. He was chased by officials but managed to evade them. “They made me run and hide three times,” he said.

Jose spent 24 days traveling to the U.S. border. He took buses from Honduras north to Guatemala before hopping the train in Chiapas, Mexico. When he arrived in the United States he was caught by immigration officials who put him in a detention center in Phoenix, Ariz. Because he was a child they did not deport him, he said.

He was placed by caseworkers with a foster family in Seattle, Wash., where he started high school. He spoke no English but had attended school through eighth grade in Honduras. “The first year was so hard because I couldn’t communicate with the teachers and students,” he said. “Also I was a little shy.”

From Train of Death to Macbeth

Jose wanted to be near his brother Elmer in Grand Rapids so he was relocated to Wyoming, where he lived with a foster family and spent a year attending Kelloggsville High School. He now lives with his brother and transferred to Wyoming High School for his senior year.

Susan Faulk, a Kelloggsville English Language Learner teacher, met Jose when his English skills were still basic. That didn’t hold him back, she said, remembering him arriving at school at 6:45 a.m. to ask her homework questions.

“One of the things I most appreciate about Jose is that he never wanted me to do the work for him,” Faulk said. “Often, students come to me with a blank worksheet and want me to help them with the entire assignment. However, Jose would take the homework home and do all that he could on his own.

“He’d look things up on the computer and would try to figure things out for himself.  Then, he’d come to me the next morning with very specific questions. He’d only want me to help him on the ones he didn’t understand, the ones he couldn’t figure out on his own.”

When he was struggling through a unit on Shakespeare’s tragedy “Macbeth” in his English 12 class at Wyoming, he texted Faulk. She met him at the library over Christmas break and helped him work through it – “only the parts he couldn’t figure out for himself,” she said.

“From day one, he has gone above and beyond. He is here early in the morning and stays late,” Trumbell said, noting that he checks in with all his teachers and likes to hear instructions in English several times before he asks for a translation.

“There’s nothing he can’t do,” she added. “Jose has a thirst for doing the right thing and for knowledge. He is the kind of student who will talk to his teachers like a young man and will advocate for himself.”

Jose said he left Honduras with the idea of working when he arrived in the United States. Education was not part of the plan. He said he was a “lazy” student in Honduras.

That changed after he started seeing the possibilities school could allow him in the U.S. “I like the school here,” he said. “I like to study hard and do everything I can to have a good future.”

He is enrolled at Grand Rapids Community College for this fall, and plans to attend a four-year university after receiving his associate’s degree to become a mechanical engineer.

“I have faith,” Jose said. “Faith that I can do whatever I want. I can do it because I try and I never give up.

“I never thought I’d be here. Now I want to keep studying in college.”

CNN story on “The Train of Death”

Politico photo essay on “The Train of Death”

“Enrique’s Journey,” a best-seller about another Honduran immigrant boy