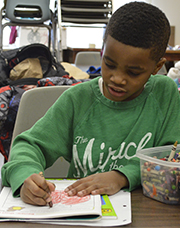 Editor’s note: This is the fifth in a series on the difficulties students have learning math, and what methods some schools and teachers are using with success.

Common Core is going to bring big changes to the way school math is taught, but those new ways will improve students’ life skills, say local teachers and administrators.

The new Common Core State Standards, a national set of academic goals, will seek to get students to use math and explain how they use it in real-life situations, said Holly Vostad, a Godwin Heights North Elementary kindergarten teacher.

“It will ask questions like ‘How do you know?’ and ‘How did you figure that out?’ or ‘How else could you do that?’,” Vostad said. “I think it will produce better thinkers.”

Developed by the National Governors Association and the Council of Chief State School Officers, the Common Core State Standards are designed to provide common expectations for math, English, science and social studies.

Many educators hope the standards adopted by 44 states will improve U.S. students’ generally poor performance in math. Jo Boaler, CEO of a math education non-profit called YouCubed, has written that Common Core “gives more time for depth and exploration than the curricula it has replaced by removing some of the redundant methods students will never need or use.”

Less focus will be put on actual numerical answers and more on understanding the math problem, said Rusty Anderson, an algebra facilitator at Kent Innovation High. In the past, specific skills like adding, subtracting, multiplying and dividing were the focus, Anderson said. While these fundamentals are still needed, the Common Core focuses on using them to solve problems.

“Real-world problems are not just about math,” Anderson said.

Test to Measure Skills Still Up in the Air

Allison Camp, a Kent ISD math consultant, agrees with Anderson’s description. “It gets away from memorizing rules,” said Camp, who has been working with Kent County’s 20 school districts the past four years in preparation for the change.

Trying to do the math to figure out whether a name brand or a Meijer brand is cheaper is an example Camp gives of the types of math Common Core assessment tests will address. Buying a house and determining what loan and payment options are best is another example of how math is used in everyday living.

“Kids are going to have to look at a scenario to figure out what math they have to use,” Camp said. “Applications don’t help if you don’t know how to apply them.”

Judy Doran, a sixth-grade math teacher at Caledonia’s Duncan Lake Middle School, likes the Common Core standards and thinks they will force students to think more critically. She is worried about the testing, though. “I think some concepts are pushed at a grade level where not all kids are developmentally ready for the concept,” she said.

As for those who have criticized Common Core math, Anderson of Kent Innovation High thinks it’s because they are reluctant to change. “People have to be open to change,” he said. “It’s not necessarily the way many people learned math.

“It’s going to take open minds of learners, teachers and parents in order to make it happen.”