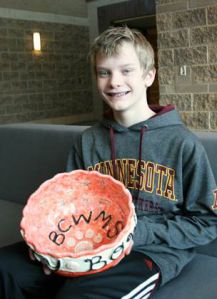 of chores around the house to earn $55.

But when Teagan, 13, had the chance to give it all away to help people in need in his community, he didn’t hesitate.

“It was not that hard because I knew it was going to a good cause and going to hungry people,” said Teagan, the son of Janine and Bruce Johnson.

For the school’s annual Empty Bowls fundraiser, students are always involved. Seventh-grade visual art students make the ceramic bowls filled with soup and bread served at the event, and eighth-grade music students perform.  Community members bid on the colorfully decorated bowls, with the money going to people in need through a local organization.

But Teagan was the first student in the event’s seven-year history to bid on a bowl, said Janine Campbell, West Middle School art teacher and event organizer.  While his wasn’t the winning bid, he ended up receiving the bowl and donating his money.

Another family cast the highest bid of $65, but when contacted they chose to make the donation but give the bowl to the next bidder, which was Teagan.

Cambell contacted Byron Center Public Schools Superintendent Dan Takens, who decided to put a late-breaking $100 bid on the bowl and asked Campbell to give it to Teagan out of respect for his generosity.

But Teagan  said he still wanted to donate this money “to make a difference.”

The event raised more than $800 for Buist Community Ministries, an outreach organization of 19 sponsoring and supporting churches committed to serving the needs of disadvantaged, lower economic, in-need, at-risk, and senior persons in the Byron area. Donations of food went to the Byron Center-based Buist Community Assistance Center’s food pantry.

The event is part of Empty Bowls, an international grassroots movement to fight hunger.