All Day, Every Day: Success Starts With Attendance 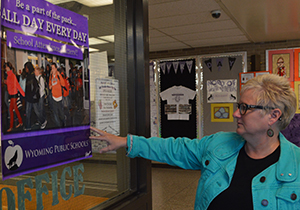 Wyoming Intermediate School social worker Christine Karas works hard to make sure students are getting to school, even if she has to give them a ride herself. “I like doing it,” Karas said. “I like getting to meet families.”

One of Karas’ main focuses this school year has been on improving attendance. The efforts she and other Wyoming Public Schools staff members have put forth seem to be working: the total number of days absent recorded amongst the student body has decreased significantly.

Along with celebrations and incentives for students who are at school every day, Karas and other administrators work to provide support for families and students with chronic absences. It is an ongoing process. They try to first get at the root of the problem and remove obstacles.

“We are saying, ‘Do you need help with transportation? Do you need an alarm clock? How can we help you to get your kid to school?'”

All Day, Every Day

The increased emphasis on attendance has occurred city-wide at Wyoming, Godfrey Lee, Godwin Heights and Kelloggsville schools. The All Day, Every Day Campaign, a partnership between the schools and the Wyoming Police Department, has contributed to the effort, along with a more focused response to working with students who have chronic absences, said Wyoming Public Schools Superintendent Tom Reeder.

The campaign started as a pilot with Godfrey Lee Public Schools last year, and Godwin, Wyoming and Kelloggsville got involved this year.

At Wyoming Public Schools, the number of students with more than 10 absences districtwide decreased from 746 in the first semester of 2012-2013 to 580 last semester.

In Godfrey Lee, where the focus has mainly been on the Early Childhood Center, the number of children with 11 or more absences at the ECC has decreased by 38 percent since 2010-2011.

In Godwin Heights, more students at North Godwin Elementary School missed a high number of days, but fewer reached 10 absences. Improvements in attendance were seen at West Elementary, the middle school and the high school. Of 19 students referred because of chronic absences at the high school, all but two improved their attendance.

Gina Kuyers, Godfrey Lee school psychologist, helped initiate the All Day, Every Day partnership after noticing a trend occurring within a support service program for elementary students. Some students who needed extra help with reading were missing a lot of school.

“We started realizing some of the kids were coming in late chronically and missing their reading intervention or missing entire days,” Kuyers said.

She and otheradministrators saw the need to address truancy as an issue in itself.

“A lot of the truancy starts early on and the children end up having lifelong problems,” she said.

“In the past, students with chronic absences failed and dropped out,” Reeder said.

Students with five absences receive a letter home from the district, 10 absences results in a meeting set up with parents and staff to discuss the reason behind the absences and to offer support. If a student reaches 20 absences with no good reason for missing, the Police Department is contacted.

But the campaign isn’t about penalizing truants; it’s about promoting good attendance because of its connection to academic success, said administrators. Parents are encouraged to focus on their children’s goals, encourage school involvement, be involved with their child’s education, and turn to the school for help, to identify special needs and consider alternative school settings if needed.

Britten said Godfrey Lee’s main priority is the Early Childhood Center since children in grades kindergarten through third are most prone to developing a habit of absenteeism, especially if they are enabled by their parents.

“We feel it will take time, persistence and support for parents who need it before the community fully gets the message that attendance at school all day, every day is important,” Britten said. 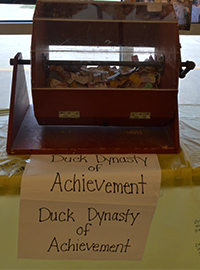 Action Could Be Taken

Many attempts to work with parents are made before criminal action is taken. A letter signed by Chief of Police James Carmody is sent home when a second meeting is scheduled.

“Michigan Law requires that your child  attend school and if you fail to appear at this second meeting the Wyoming Police Department  will have no choice but to enforce the truancy laws and applicable ordinances, which may result in criminal charges being authorized against you,” it states.

“We got involved with younger kids to make sure that parents are aware, that as far as we are concerned, we consider it neglect if parents aren’t getting their kids to school,” said Lt. Scott Beckman, who in charge of support services for City of Wyoming Police Department.

All Day Every Day campaign