Alternative Students Challenged to “Be Phenomenal” 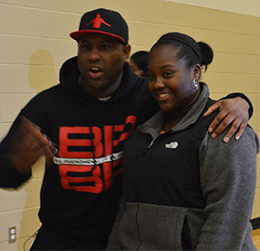 If you can survive on the streets, you can survive in school and, later, in the marketplace.  If you don’t, there will be very few options available to you, motivational speaker Eric Thomas told Crossroads high school students.

“You’ve been through a lot,” he said. “A lot of times you walk through those doors and they don’t know what you’ve been through.  You’re a survivor. You’re a warrior…you can survive all this stuff and you can’t survive math class?”

“It’s your world, it’s your life,” said Thomas, challenging the Kentwood alternative high school students. “There are no limits except the ones you put on yourself.”

Dressed in Nike pants, a cap, Jordan shoes and a sweatshirt with the words “Be Phenomenal, Not Forgettable,” Thomas spoke about how he went from being a homeless teen to turning his life around, obtaining his master’s degree and now pursuing his doctorate in education administration at Michigan State University. He is the author of the books “The Secret to Success” and “Greatness is Upon You.”

While consulting at Michigan State, he developed The Advantage Program, an undergraduate retention program targeting academically high-risk students of color. He consults with professional and collegiate athletes including MSU teams.

No Degree, No Options

He told students to figure out what they want to do and “do it with excellence” and that they can get through the challenges they face.

Born in Detroit, he said he grew up in a rough environment as the son of a teenage mother. Still, at age 43, he is thankful to his mother every day for her love and support. She was a big reason he got on the right path, he said. Now he works hard for his wife and two children.

He said his education and hard work means he has options in life. He can set his own price for his services and do what he wants to do.

“I got options I didn’t have in high school,” he said. “When you’re a high school dropout, you have no options… I guarantee in 10 years with no degree, everybody will be telling you what to do.”

He told students to stop being their own enemies, to use their street smarts to do better at school, and to break the cycle of poverty and lack of education in their families.

Monica Petriuc worked to bring Thomas to the school as part of the after-school ARCH program, which she coordinates. The program helps students work toward their goals of credit-recovery and graduation though academic work, field trips and community service activities.

She said it’s very important for Crossroads students to have positive role models like Thomas.

“Our school doesn’t get the merit or the attention it should,” Petruic said. “These are some of the most underprivileged kids. They don’t get the motivation or the hope that they are going to be somebody at home. We are the only ones that push them.”

Students introduced themselves to Thomas, some told him how much they were inspired.  Thomas promised to continue to help them. “Social networking makes it easy,” he said.

He promised students that his work goes beyond a speech. When someone takes the time to care, it means the world to students, he said. 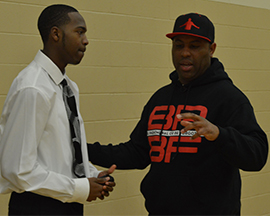 “Now that the door is open I’m going to be the bridge to get them from here to where they want to be,” he said.

Freshman Kirk Taylor introduced himself to Thomas. He said he was moved by the message to not put limitations on himself.

“He came from a fatherless home; I come from one… He was a great inspiration to me,” Kirk said.

Senior Shonteonna Dempsey said Thomas was able to get the attention of students.

“Some of the guys asking questions usually don’t talk much,” shesaid.