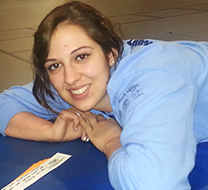 As teachers and students tuned in during a live broadcast, TedxGrandRapids speaker Roberto Rivera described a young Latino boy named Carlos who was labeled as learning deficient, eventually ran away from home, got arrested, went through drug rehabilitation and tried to commit suicide.

“Anybody know a Carlos, a young person struggling to find meaning and purpose in their life?” he asked the crowd of about 400 during the third annual Tedx Grand Rapids Livestream for Education at East Kentwood High School.

It was his own story, the story of Roberto Carlos Rivera, now the president and lead change agent of the Good Life Organization, through which Rivera has had huge success in improving the grades and lives of disenfranchised youth by focusing on their strengths and interests, like hip-hop music.

major entitled “Social Change, Youth Culture and the Arts.” He received his master’s degree at University of Illinois at Chicago in Youth Development with a focus on Social Justice, Urban Education, and Hip-hop.

“I get people asking me, ‘How did I go from being helpless and hopeless to helpful and hopeful? How did I get from being a dope dealer to what I call myself today?’ I’m a hope dealer,” he said. “It’s no doubt that the foundation for this transformation came from relationships with folks like you who have what I call Michelangelo vision.”

Renaissance artist Michelangelo was able to see the potential of a stone most people saw as defective and without value, Rivera said.

“Michelangelo could see the beauty and brilliance of the sculpture within that stone and he said his job was easy. He only needed chip away the rough parts.”

He said educators helped him realize what he could find within himself.

“I embarked on an educational journey with folks like you who helped me to realize I have purpose, I have people, I have passion, and, yes, I even have pain, and that pain can become propane for me to transform my life and to transform this world,” he said.

Rivera teamed up with researchers and artists to create curriculum called Fulfill the Dream, teaching leadership, relationship and citizenship. It engages young people with media, metaphor and music by working with communities across the nation.

About 450 educators and students gathered at the third annual TedxGrandRapids Livestream for Education to listen to Rivera and a slate of other speakers who have worked to answer big questions in innovative ways.

The specially focused event was part of TedxGrandRapids, a daylong broadcast of international speakers at Grand Rapids Civic Theatre, which focused on themes including technology, education, the economy and people. 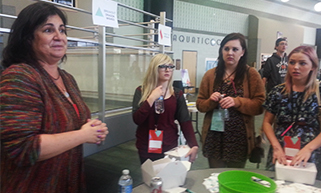 Dalin Clark, event creator and lead organizer, created Livestream of Education after attending TedxGrandRapids 2011 to offer a streamlined event for educators and students to come together and share.

“Simply, I think the world is a really cool place and I want teachers and students to know that,” Clark said. “We really hope they walk out of here saying, ‘Wow, I never thought of it that way.'”

Participants said the event created new energy to bring back to the classroom.

“I’ve always been a Ted watcher,” said Jason Kornoely, a teacher at Pine Ridge Elementary, in Forest Hills Public Schools. “The focus on education seemed like an excellent marriage. The ideas that come forth and perspectives people gain from here can be huge.”

“I feel like it will open people’s minds to try new things,” Kaci said.

“It’s pretty inspirational to a lot of us,” Darrick said. “I had a rough start and I can relate to a lot of these guys.”