“Shwoo,” he said, flipping the long end of the tie up through the loop started around his neck. “You’ve got to make the sound too.”

“Shwoo,” the 15 boys answered, following instruction with their own ties.

An hour later, students were securing their new ties all by themselves, helping each other with the looping and knotting, and flashing bright, grown-up smiles.

The non-native English students received the lesson in dressing up from Jermale Eddie, employment and education specialist for Grand Rapids Urban League, and Eddie’s friends Moss and Wesley Morgan, a local business owner and crisis counselor.

Grand Rapids Urban League is a non-profit organization which assists people in achieving self-sufficiency and equality through education, housing and health care programs. The organization donated about 30 colorful ties to the school. All of the boys participating in the event got to keep one, and the rest were given to the school’s clothes pantry. For many of them, it was their first tie.

Sarah Russell, community school coordinator for Kent School Services Network, said one reason the event was planned was to prepare the boys for the upcoming eighth-grade awards banquet.

“A lot of students choose not to go because they don’t have adequate clothing,” she said. “The resources aren’tavailable to get them.”

Perfecting their tying skills took some practice, and Eddie walked them through the process, step by step.

“Everybody have a knot?” he asked, looking around at half-tied ties early in the session. “Alright let’s do it again.”

The men taught the boys three different ways to tie the ties securely.

Moss got fancy with his group of boys.

“That’s called a Windsor knot. I’ll show you how to do a double Windsor,” he said.

Eighth grader Dung Huyn said he plans to wear his tie to the eighth-grade awards ceremony. 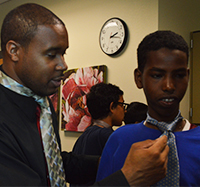 “First I thought it was hard, but it’s kind of easy,” he said of tying the tie. “They are nice.”

Eddie said teaching the boys to tie their ties was important to him.

“A lot of boys don’t have fathers to teach them to do this,” Eddie said. “My grandfather taught me when I was 16 or 17. I thought it would be good to give them that father-son lesson.”

“If you look good, you feel good. You can buy one tie and wear it with a bunch of different things.”

Morgan said he participated to invest time into youth who will use the skill throughout their lives for job interviews and other professional events.

“It’s a life skill that can take them further than just sports. It’s that self-esteem booster. Just like someone gave time to them, they are going to go out and take time for someone else.”

oss said tying a tie is a skill that goes a long way.

“A good tie and a good handshake make a great impression,” he said.