Brightening the Lives of 4th Graders 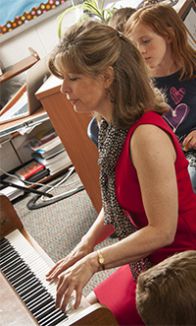 Even though the sun has officially launched summer, I still see Stephanie Gerdes standing at the helm of her 4th-grade classroom inside Kenowa Hills’ Central Elementary School. I am thinking how lucky are the kids she’s just promoted to 5th grade, and how lucky are this year’s 3rd graders who will be privy to her remarkable world come September.

I’ve met a ton of educators in my life, but few compare to Gerdes, and it’s why I’m here. She has been recommended as exceptional for myriad reasons, all of them connected to this tenet: She loves her children and will do anything to watch them soar.

In the first few minutes of meeting her, I nearly lost her in a hallway because she was bounding around corners with a sprinter’s speed. When I caught up to her in the school cafeteria, she was managing 22 children, every one of them immersed in a presentation on our 50 states, and then overseeing a pageant rehearsal of the same, and then racing back to her room where she led a Latin lesson, and then playing the piano while they all sang “Hello To All The Children Of The World,” and suddenly we’re petting Sophie the kitty cat.

Ladies and gentlemen, they don’t teach this in college.

Stephanie Gerdes is the product of a life tied to a servant’s heart.  She has a head for history, an appreciation for our differences, and a desire to go the extra mile for those in your heart’s care.

It also doesn’t hurt that she’s engaging, vivacious and subscribes to a lifestyle that includes everything from reading to walking to Nordic skiing to gardening totraveling to antiquing to ballroom dancing to teaching piano lessons in the evenings and just what have you and I done today besides Swiffer the kitchen floor?

Oh, and in her spare time, she co-authored a full-length memoir of World War II soldier Virgil Westdale, entitled “Blue Skies and Thunder.”

Over the last two decades, Gerdes has taken kids to the ballet, taught them manners, provided quotes for the day, shared truths about Native Americans, shown movies like “Meet Me In St. Louis,” and encouraged kids to stand together in a copse of trees and recite from memory Robert Frost’s haunting classic, “Stopping By Woods on a Snowy Evening.”

These 9-year-olds know who Wordsworth was. And Poe. And  the meaning of “hyperbole.” And what drew immigrants here. And the significance of Passover. And that “circum” is a prefix. And if you’re a freckle-faced redhead named Treasa Bell, pretty much everything about Utah. 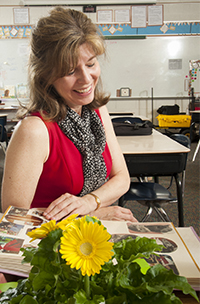 The product of two teaching parents, Gerdes’ resume reflects a B.A. in elementary education from Wheaton College in Illinois and an M.A. in reading and language arts from Grand Valley State University.

But she actually began teaching at 5, with her 3-year-old brother Matt as her first student, who would be surrounded by teddy bears and dolls and lesson plans.

Matt’s scarred still, but it only whetted Gerdes’ appetite for more, and while growing up in a home engulfed by corn and soybean fields, she “played school” and developed pretend worlds in nearby woods with neighbor kids, inspired by her beloved “Little House” series books, which she’d read in a bedroom that overlooked a stately crabapple.

She craves to know more and different: “In summertime, I love to travel,” she said, counting among her destinations Germany, Hungary, Russia, Costa Rica, Croatia, France and England.

“Walking is one of my favorite things to do, especially in a place like St. Petersburg. I just love history, the culture of a place, its architecture.”

Then she adds this melting factor: “And wherever I am, I wish my kids could be with me.”

Endearing yes, but it makes you wonder if she has a life, and as if anticipating the question, she says exactly this: “I do have a life,” and in the same breath acknowledges  “I do feel like my students are my children.”

Single her entire life, she has a large passel of friends, some of whom she’s met while ballroom dancing.

One of her best, Rachel, lives in Australia, and they share nuggets of truth with one another. “Rachel says the way to make time slow down is to really watch each moment as it unfolds.”

Which would be a challenge in this 4th-grade room, where a lot of them seem to be wired for “Fast Forward,” and just then I hear, “Ms. Gerdes, I had an apple but I don’t know where it went.” 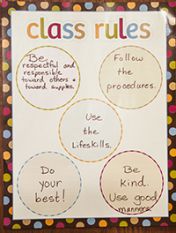 Gerdes solves that one quickly, and then she’s explaining why she teaches what she does. “Each Tuesday morning, we spend 10 minutes talking about Latin roots. The other thing I do is teach all the holidays. If you see a menorah in someone’s window in December, I want you to know why that’s there.”

If anyone commits a grammatical miscue, she corrects it. She completely defends her insistence that children memorize certain important poems and passages. And everyone masters cursive.

“Boys and girls, can you tell Mr. Rademacher why I believe in cursive?” and without missing a beat Lydia (who happens to be the Statue of Liberty in the play) says “It helps the mind develop,” to which Justin adds that “You can grow up to become a better writer and maybe grow up to be president of the United States,” which is logic for which I have absolutely no counter-argument.

And then Gerdes reminds her young charges that if they go to Washington D.C. and view the actual Declaration of Independence and like documents, they’ll be able to discern the letters, and there’s a joy and value in that.

In a nutshell, that’s what she’s after – joy and value – impressing on her students not just what MEAP tests sayeth ye shall learn, but so many other intrinsically important elements of a life well-lived: art, music, poetry, dance. 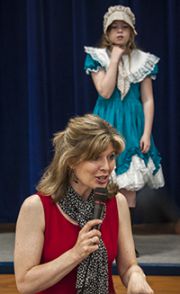 Tim Carlson, Central Elementary’s outgoing principal, says he’ll look back with fondness on teachers like Gerdes: “She’s very creative, passionate, and develops an excellent rapport with students. She has the ability to challenge them, which requires a lot of time and effort on her part.”

He goes on to say that’s reflective of others on his staff as well, which includes a glass-blower, potter and assorted musicians. “That’s really good for a holistic view of education, and these are teachers who are willing to grow and develop (and) stay current, even those teaching 20-years plus.”

Cindy Ruscett, Central’s assistant principal, says Gerdes “thinks about the details of things in a way that shows real concern and attentiveness.”  Ruscett was impressed this past year when Gerdes, in a newsletter to parents, encouraged them to “Take some time this weekend to get out to Grand Haven and see the ice chunks on the pier.”

“This suggests that she cares about the whole family and wants them to enjoy the beauty that she sees in the world,” says Ruscett.

When Gerdes sees need, she does her best to fill it. She befriended a young refugee from Bengazi named Takwa last school year, inviting her to her Heritage Hill home for cookies and tea before taking her to see “The Nutcracker.”

Children in Gerdes’ class sense they’re in the company of someone special. Jailah Munguia told me that her teacher “is nice, generous, and she’s always thinking of nice things to do for us. All the other teachers just do like regular stuff. We can share our lives first thing every day and the others don’t do that. She’s one of the greatest teachers I’ve ever had.” 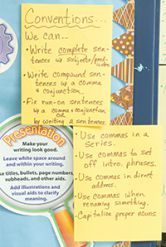 Those who have graduated 4th grade to 5th don’t forget their time with Gerdes. Ava Deschaine said that “Fourth grade was challenging, but I stuck with it, and in the end I was a better person.”

Added Caleb Martinez, another 5th-grader now bound for 6th: “Every morning, she was like a sun, making everyone happy when she greeted us at the door.”

Despite the accolades, Gerdes isn’t ever quite satisfied, always yearning to be better, to better engage and enhance her next batch of kids.

“I’ve never achieved being the teacher I want to be,” she admits. “I always end the year wishing I’d done more, and I’m always grateful for a fresh beginning the next year.”

So there you have it. The Sun itself, still trying to improve its shine, tramping who-knows-where this summer, kids nestled in her heart, anxious for new beginnings, some Frost to share, and so much more, first wrought from the shadow of a crabapple.