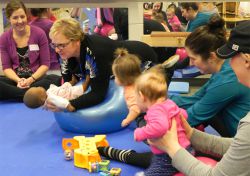 Rubber mats, bouncy balls and sing along songs are part of the experience for students enrolled in the new Childcare program at Kent Transitional Center (KTC). Because of a partnership between KTC and Kent ISD’s Early On and Bright Beginnings programs, which involve parents bringing in their 0-5 year olds for developmental activities, students in the Childcare program get to interact with children as part of their curriculum.

“Students are getting hands on experience instead of just learning from books, computers, and DVDs,” explained Childcare teacher Beth Maiser. “This opportunity creates an anchor for the learning they do in class.”

The credits for the Childcare program will also count toward 3 college credits for GRCC’s Preschool program, which the students got to tour at the beginning of the semester.

“I want to own my own childcare center, or at least work at one,” said KTC student Naton Brown, who appreciates the opportunity to get a jump start into her desired career, even before finishing high school.

Students in the program study the foundations of childcare, such as safety, nutrition, and learning styles, as well as the stages of development from birth to ten years old. Requirements include creating lesson plans for children at each stage as well as developing a model for a caregiving environment.

Conveniently, the Early On/Bright Beginnings play rooms are just down the hall from the Childcare classrooms. During the several sessions that happen weekly, a couple students head down to spend time with children and their families, applying their own lesson plans and concepts they learned recently in class.

Often, families in the Early On program bring a sibling of the child in the program, which the students will interact with in a separate play area. If during a session no siblings are brought, the students will sit in with the families, and observe how Kathy Harris, a physical therapist and Early On educator, leads the group activities designed to stimulate cognitive development.

“My mom is an in-home nurse for children,” said Ashley Franklin, a Childcare student who hopes to pursue a similar career.  “Helping with Early On lets me learn how children behave during developmental stages before I go into nursing.”

Students are really engaging in the program, said Beth Maiser. Students immediately began connecting the dots between what they have learned in class and experiences they have with a sibling or other young family members. Maiser said the students love to share their own stories now that they understand why their relatives behave a particular way at different ages.

Plans are already in place to partner with a nearby childcare provider, Apple Tree Learning Centers. Students will soon be able to experience larger-scale childcare programs by engaging with more kids, and shadowing the professionals that work with them.

“If students learn how to be a better parent or aunt, that’s great,” said Maiser. “If they choose to go into the childcare profession, that’s great too. My goal is to make students better citizens overall.”