The blockbuster video games that line the shelves of East Beltine’s GameStop were put on the backburner for a spring afternoon as 3D Animation students from Kent Career Tech Center rolled out their own creations. Several students showcased video games they had developed during the school year at the Tech Center for their Art Movement projects, each team unveiling unique concepts, styles and stories.

At the front of the store, two students navigated a tangled mess of cords under a monitor to get their project up and running. It was not a game for entertainment, but instead, a living, breathing replica of a real place: Indiana’s Historic Fort Wayne.

The Tech Center’s 3D Animation and Game Design teacher Amy Badovinac said the idea for the project arose from a conversation she had with a fort representative at the fort in 2012, on STEM day at the museum. “Bob was dressed in full uniform with a few items and some pictures,” she said. “We got to talking about what his role was at the fort and how he impacted the community.” Badovinac presented to Bob the idea of creating some type of animation or game to represent the fort, and the two remained in touch over the next year, bouncing ideas.

Night at the Museum

In May 2013, the Tech Center and Innovation High sent a group of 30 students and staff to the fort for Education Day to gather research. “The enthusiasm of the staff and students was overwhelmingly positive with a variety of ideas for the future,” Badovinac said of the initial fort visit.

The students returned and spent a night at the fort in November. “We stayed in cold straw beds,” said Godwin Heights student Morgan Rupert. “That was an experience,” she laughed as she and Walter Horjus, homeschooled, prepared to present their April 2014 version of the virtual fort at GameStop.

“The creators of ‘Finding Nemo’ spent countless hours watching how fish behaved at the Aquarium of the Pacific to create a realistic environment and actions for Nemo and his friends,” Badovinac said. “Our students needed to understand what it was like to live at the fort.” The students worked through the night, eating and staying warm by firelight in the 15-20 degree air. It gave them a sense of how to bring the atmosphere of an 1812 fort to digital life. They conducted extensive research at the fort’s library’s genealogy and history sections, and at the nearby Historical Society Museum of Michigan.

Bringing the Fort to Life

Walter Horjus manipulated the simulation’s controls at GameStop with a sense of familiarity. As the world materializes on screen, the viewer is placed in a first-person perspective as if navigating the fort on foot.

He moved the camera toward a doorframe with wood grain texture. “We recreated the textures of wood from photos we took at the fort,” Morgan Rupert said. She explained that the dimensions of the fort are to scale and the buildings are rendered in photo-realistic textures and lighting.

Kent Innovation High students will handle filling the virtual space with characters, Rupert explained. They will be based on actors who inhabit the fort today, whom the students interviewed and profiled.

Through the project, the Tech Center and Innovation High students fulfilled the learning that each of their programs requires. The 3D Animation and Game Design students met all state standards through their work on the project. “Digital Imaging students took a variety of references images just as they would photo shoots in the classroom,” Badovinac said.

The project reaches far beyond the walls of the fort or the Tech Center classrooms. The information the Innovation High Honors English students gathered about the re-enactors at the fort will be shared as supplemental teaching material to coordinate with both Michigan and Indiana’s Common Core standards, Badovinac said.

The ultimate goal is to share the fort’s history with schools across the country. “We can spread it across America without leaving boundaries,” Morgan Rupert said. “Kids will get the experience of a visit.” 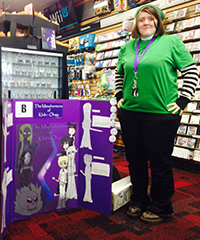 On April 25, the students presented the Historic Fort Wayne Project to the public at Protégé Gaming Studios in Grand Rapids. Their audience included re-enactors from the actual fort, who had the opportunity to demo the game. The students were working hard as the public watched. “I could not have been more proud of them,” Badovinac said.

Going forward, advisory committee members, including one from Protégé Gaming, will continue to advise the Historic Fort Wayne Project as students carry on their work over the summer.