“Are we doing Be Nice today?,” students asked eagerly as they took their seats in Kelli Jurek’s 8th grade seminar class. Many of them were clearly excited to have their peers leading that morning’s interactive session. Sparta Middle School recently held the 22nd (and final) student-to-student lesson plan covering the fundamentals of the Mental Health Foundation’s Be Nice program.

The program was developed to prevent bullying and reduce stigma about mental health conditions. The school’s Leadership Team, 27 students who have displayed a passion for the Be Nice ideals, held a student run assembly in front of the whole school in February and now have had the opportunity to do more focused lessons on a class by class basis, covering the entire middle school student population.

Jurek said she saw a real benefit in the program. “It’s the awareness – the ability to make the snap decision to do the right thing.”

The leadership team said they’ve come a long way since they began participating in monthly training sessions to prepare them for their peer-to-peer lessons.

“Now we can teach the Be Nice message so it’s clear to many others,” added Madi VanLaan.

The leadership team was responsible for determining the flow and content in the presentation, which included some teaching, discussing, an inspiring video, and a game of mum ball.

VanLaan started the presentation to her classmates: “Does anybody remember what Be Nice stands for?” Several hands went up. She explained the importance of each word in the N.I.C.E. acronym – Notice, Invite, Challenge, and Empower. Her classmates chimed in with how they defined the words and gave examples of how they have incorporated the ideals into their lives.

Ungrey continues the presentation with the acronym for S.T.I.G.M.A. – Stereotype, Teasing, Ignorance, Guessing, Mean/Malicious, and Attitude. These are the behaviors we need to recognize and avoid, she explained.

The lesson continued with Austin DeKraker introducing a video from a basketball team in El Paso Texas where Mitchell Marcus, the team manager with a disability, made a basket after a member from the opposing team passed him the ball. Many of the students in the classroom shared that, in the moment, they probably wouldn’t have thought to pass the other team the ball, but agreed it is important to be able to react to situations in ways that will be welcoming and friendly for anyone.

Then the students broke out the “mum ball”, an activing where students passed a ball around the class and offered compliments to classmates.

“You always have interesting things to say.”

“You never let anyone down.”

“You’re nice to everyone and always make me happy.”

These are just a few of the things students shared with each other.

The students were then ready to say the Be Nice pledge, which the leadership team wrote themselves. Sparta Middle School plans to incorporate this into the daily classroom routine that includes the Pledge of Allegiance.

Just before getting dismissed for lunch, the students signed a Be Nice banner to signify that they stood behind their pledge.

Keeping the leadership team meetings and presentations on track was Sparta Middle School Counselor Karyll Russell, who told the class “Daily, I am pleasantly surprised by the good things I see around the school,” before turning the lesson over to the leadership team.

Russell teaches the leadership team that understanding different people’s circumstances is the key to reducing stigma. Once you start assuming something about someone, then you are at risk of treating them poorly. She said that since the beginning of Sparta’s involvement with be nice. she has seen an increase of students telling each other to be nice, and more positive dialog in the halls. 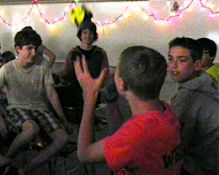 “The increase of positivity across the board has allowed me to focus on the students who are struggling, the ones that need support,” said Russell, adding she is also really proud of the leadership team for taking on their roles.

“My hope for the community is increased awareness on mental health issues – the more we talk about it, the better.”