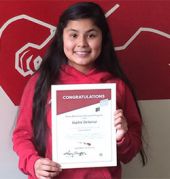 Her clothes are arranged by color.

Like Pippi Longstocking, she sleeps upside down, with her head at the footboard and her feet at the headboard.

Ever since first meeting “Bucky” in the Disney flick “The Emperor’s New Groove,” she’s been in love with squirrels. And in her own words, the two bouts of cancer she’s endured have only “helped to make me a better person.”

None of that showed up on her application form, but it just goes to demonstrate the moxie, whimsy and creativity reflected in the life of India Stewart Dunning, who is the second student in two years from Kent Career Tech Center to snag a coveted Gates Millennium Scholarship.

A graduate this past May from Forest Hills Northern High, India, 18, was preceded by 2013 CrestonHigh standout Kaleab Mamo, 19, who just finished his freshman year at the University of Michigan. India just earned a certificate from KCTC’s pharmacy technology program, while Kaleab graduated from the alternative energy program.

Both India and Kaleab are in line to have all four years of their undergraduate education completely financed, with the option to renew in certain circumstances that might also fund their education through a doctorate degree. Each scholarship is worth upwards of $350,000.

More than 52,000 students applied for this year’s round of scholarship, the largest number in the program’s history. Gates Millennium Scholarships (GMS) are awarded by the United Negro College Fund through a historic $1 billion grant from the Bill and Melinda Gates Foundation. They are specifically designed to assist students from predominantly urban districts who have earned a GPA of 3.3 or better and meet Pell Grant income eligibility criteria.

The scholarship recognizes strong leadership, community service and academic achievements. Labeled “the ultimate life-changer” by more than a few educators, the scholarships provide untold opportunities for qualifying minority students by covering the cost of college. They also cover the cost of studying abroad, and programs to further develop their leadership skills.

It takes a lot to reduce India to tears, but the day the announcement came to the Dunning family’s front door was an emotional one: “I was ecstatic, and crying, and thanking God that I’d won, because it was truly a blessing,” she said.

That same scenario played out at Kaleab’s home last year on Grand Rapids’ North End: “It was very surprising,” said Kaleab. “I was certainly happy, and my mother was crying.”

Both India and Kaleab are remarkable young adults, and not just for their academic accomplishments.

Kaleab emigrated here from Ethiopia. His father came here first, and was granted political asylum. Kaleab and his mother followed, arriving on U.S. soil in 2009. Neither was able to speak English. In five short years, Kaleab has mastered not only the language, but ascended in other ways as well, and he now has his eye on a career as a neurosurgeon.

While at Creston, he was president of the National Honor Society, participated in a robotics competition, volunteered at the Grand Rapids Home for Veterans, and worked as a research specialist at Grand Valley State University. In his spare time, he enjoys watching French flicks.

Both Kaleab’s parents – father Tsehai Assefa and mother Woinishet Wolderman – are employed in the housekeeping department at Spectrum Health. Kaleab’s dream involves giving back: “My goal is to become a doctor and be able to volunteer in several countries, any third-world country, really. I know there are lots of opportunities in the world.”

In large ways, she’s refused to let either malady serve as a major setback. In fact, they’ve only strengthened her resolve to serve others. She’s volunteered over the years at Michigan Blood, Planned Parenthood, the American Red Cross, and at events sponsored by Helen DeVos Children’s Hospital.

As a student at Northern, she served on the NHS Board of Directors that organizes community volunteer activities, as well as the Principal’s Leadership Team at KCTC. She also earned her varsity letter and pin for cheerleading and crew. At the Grand Rapids Township home she shares with her parents and brother Isiah – a senior at Grand Valley State University — you’ll find her bedroom adorned with pictures of family and friends, and also of R&B star “Drake.” 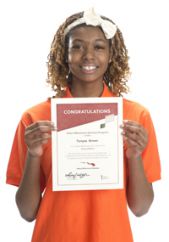 And, um, this: pics of squirrels.

She laughs: “One of my favorite movies is ‘The Emperor’s New Groove,’ and I just fell in love with the little squirrel (a buck-toothed cutie named ‘Bucky’).” After saying goodnight to Bucky, India prefers to sleep in reverse fashion, with her feet at the headboard. “I don’t know why,” she says, giggling again. “I just sleep better that way.”

While her room isn’t the neatest one in the home, she’s got her clothes organized to a “T,” with garments sorted according to color.

KCTC Principal John Kraus could not be more proud of both Kaleab and India, acknowledging how they bring a source of pride not only to their primary high schools and school districts, but KCTC, which has worked long and hard to earn the respect of patrons and educators over the last few decades.

“I don’t think this is a matter of happenstance, but instead a reflection of some very rigorous curriculum at both Creston and Forest Hills, and at KCTC,” he says.

“We’ve worked very hard to change the perception of what KCTC brings to college-bound students. We’re there to enhance their options and help them examine and explore a wide breadth of pathways.”

To that end, KCTC engages with people in the services and industries their programs aim to serve, and teams with them to create dynamic advisory boards aimed to give students real-life experiences.

“We love seeing the individual stories of achievement,” Kraus says, “and I was present the day after India found out she’d won the Gates scholarship. The smile and delight on her face and on her mother’s face was priceless.”

Kraus says he’ll be tracking Kaleab and India as they progress through and beyond college. “I believe,” he says, “that they might change the world.”

Tom Rademacher
Tom Rademacher was long-time reporter and columnist for The Grand Rapids Press, where he specialized in wringing the extraordinary from the seeming ordinary. Read Tom's full bio or email Tom.

Determination is key to getting it done

A graduation victory for this band of brothers

The Joy of Dance! A total dancer experience