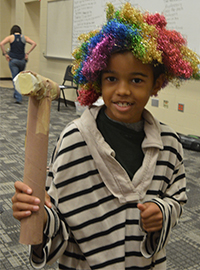 For the performance of “The Time Machine” third-grade student Isaiah Predman’s self-assembled costume was a pirate outfit with a rainbow-colored clown wig for his character, Curly.

Building a costume was one of Isaiah’s favorite parts of the recent four-day Summer Theatre Camp at Van Singel Fine Arts Center, located at Byron Center High School, he said.

“Dressing up is fun,” said Isaiah, a Marshall Elementary student, before beginning a dress rehearsal with the cast of other third-through-eighth-grade campers.

The experience was an adventure in imagination, self-expression and developing confidence for the novice actors, said program directors.

“We have a crazy-haired pirate because why not?” said Maria Blanco, camp co-director.

For Steffens and Blanco, the camp, in its ninth year, is about bringing students out of their shells to embrace the possibilities in theater.

“I see this as a way that enriches self-confidence for everything in life, Steffens said, noting that theater helps students develop public speaking and presentation skills, and teaches them to take ownership of their work.

“So many parents say, ‘You did not give me back the same child I brought on Monday,’” she said.

He said the camp was a great time.

“I liked dressing up and acting,” he said.