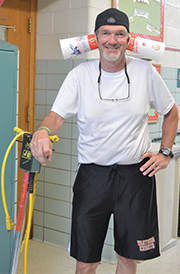 Many who have walked the halls at Oriole Park Elementary School know Bob Pickard is a superhero.

To students who have inquired about this cleaning-carted crusader, he called himself a “Superhero Listener.”

The longtime custodian (who may be able to clean school buildings faster than a speeding bullet) is known to fashion huge ears out of cardboard or paper cups and attach them to the sides of his head.

“It’s very important to listen,” he told students who asked about his supersonic ears. Their giggles always followed.

“I want to make myself look funny,” said Pickard, known to students and staff members a Mr. Bob.

But it’s not just the ears; His super powers go way beyond listening. Pickard has a way with students and staff that leaves them feeling cared for and appreciated. He gave students who helped out with tasks thank-you notes; teachers who needed an extra job completed could consider it done; he hired students who needed encouragement for a dollar a day.

“I’ve really enjoyed the kids. It’s been fun to see them every day and interact with them,” he said.

They’ve enjoyed interacting with him as well.

“He worked hard and was really funny he always loved to make us laugh,” said third grader Skylar Dornbos.

Pickard is retiring Aug. 29 after 22 years as a custodian in Wyoming Public Schools. He worked at several other district buildings, but after a temporary stint at Oriole Park he knew he wanted to return there full time if he ever had the chance. He did in 2009.

“They made me feel so welcome,” he said. “I felt led by God when he brought me over here to make an investment, to take some time and invest in the kids. He’s shown me some ways to do that.”

He mentioned a few: races in the hallways with students, turning the girls ballerina-style in circles, and helping start a children’s Bible Study at school. He said he appreciated teachers’ patience when little girls lined up to be twirled, or when he broke the “no running in the hallway” rule with the students

Staff members have their own Mr. Bob stories. Third-grade teacher Sheri Adams said his listening powers were not underestimated.

“He is someone who stops to ask ‘how are you?’ and doesn’t want a pat answer,” she said. “He wants to be a listener. He waits for the other person to stop, look him in the eye and give an honest answer.”

He would also add a personal touch to his work that went way beyond just keeping facilities gleaming.

“When cleaning the bathrooms, he didn’t just put a ‘Closed’ sign up. He always made a little rhyme and wrote it on the sign for the kids to remember their mothers or fathers and say thank you, or give them a kiss, or give them a hug,” she said.

First-grade teacher Danielle Terpstra said Pickard helped students see their importance and feel like they each had a role at  the school.

“He gave them special jobs, often making connections with some of the most challenging little people. He was constantly sharing encouraging words with them and passing out high fives.  He asked kids and staff alike, about their lives outside of school, extracurricular activities, families, church. His are certainly very big shoes to fill,” Terpstra said.

Third-grade teacher Ginger Vander Beek said Pickard always has time for others, every student and teacher.

“Students look for him. They love that he knows their names and they can tell he genuinely cares for them. My own son would seek him out after school, just to help him. I believe mostly because kids felt great about themselves in his presence. Bob cares about our students, he cares about his work, and he genuinely cares about people. I am sad to see him retire.

Pickard, who lives with his wife, Linda, in Byron Center, grew up in Wyoming and graduated from Wyoming Rogers High School. He has two stepsons and a grandson.

Pickard said it was a difficult decision to retire.

“It’s been hard for me giving up the school,” he said. “The parents, kids and the staff have been so wonderful.”