Public Education Advocate Stresses Need for Schools to Support Each Other 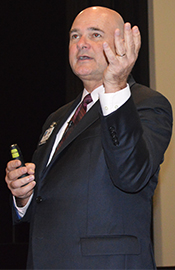 Improving the perception of public education requires being a champion for all schools, said national advocate John Draper.

“If you are sitting in a teacher’s seat today you are working harder than you ever have; the research I can share with you says you are doing better than you ever have, yet there’s all this negativity surrounding our whole profession. All these people are talking about us and how to fix us,” he said.

To an audience of Kent ISD staff and local teachers, Draper emphasized the need of gaining public support for education in a time when it is constantly embattled. His presentation, “Paddling Upstream in the Public School Canoe,” touched on the struggles educators face on a day-to-day basis and how to shed light on the positive.

Draper, consultant for the National School Public Relations Association, has formerly held the posts of high school and middle school teacher, assistant principal, principal, executive director of the Council for Leaders in Alabama Schools and CEO of the Educational Research Service. He now lives in Virginia, near Washington, D.C.

There’s an interesting paradox when it comes to people’s views on public education, he said. A large majority of parents and community members ratetheir schools as good, with a grade of an A or B, yet they rate U.S. schools in general poorly. This impression persists even among teachers.

“This myth undermines us all across the USA: ‘Our schools are good but the rest of them are lousy.’ That myth out there allows any elected body to do bad things to us,” he said. It encourages state legislatures and congress to punish or reconstruct our “failing” public schools, he said.

Advocate for Each Other

There are 8 million public school employees nationally, Draper said. Leading them to effectively and actively support schools is the first step to changing public opinion about all public schools, he said.

“If we can’t win (public school employees), how are we going to win everyone else?” Draper said. “You are the frontline; you are the ones who can make a difference. … We’ve got to extend public opinion from local to national. We’ve got to convince you there are good things happening in every school.”

Most teachers didn’t go into education to be politically active or a target for national controversy; most want make a difference in the lives of children, yet it’s become necessary to speak up for all schools, he said.

A common tendency is for educators to believe their district is better than “fill in the blank” schools, he said. But it’s damaging to label lower-performing districts disparagingly. Instead, educators must work diligently to improve the image of even the worst-performing schools.

“We have to be very careful when we fill in the blank. The blank is almost always filled with a school district that is of a lower socioeconomic standard,” he said. “I’ve been to those districts and, yes, they have some challenges, but there are really good things happening in those districts too.”

Put Emphasis Off of Test Scores

“It’s time that we in the education family have a quiet revolt against the dag-gum test scores,” he said.

While Draper noted standardized test scores serve a purpose and were created to improve teaching and learning, they have taken over the system, he said.

“Let’s get off of test scores,” he said, a statement that was met with applause. “Test scores are not a good thing.

“They have become all-consuming to many of our superintendents. They feel like they are defined by the dang test scores. If we define ourselves by the test scores we are dead in the water. We’ve got to work on redefining ourselves.”

Instead place the meter of success on the graduates– the individuals that cross the stage in caps and gowns, he said.

“The nation’s graduation rate is at an all-time high,” he said. “We are right at 80 percent nation-wide.”

Focus on the Students

Too much data-sharing and generalizing buries the real stories, the individual students who are the faces of education in America. Put a face on children, especially children in poverty, he stressed.

“Educating children of poverty is the real challenge for us in the schools today,” he said.

Twenty-one million children in the nation are on free and reduced lunch, he said.

It’s educators that can work to change perception, to tell stories of success in all districts, he said.