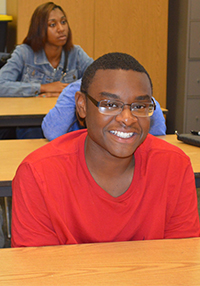 Students at Kelloggsville’s  54th Street Academy stood in the hallway after lunch, joking and laughing. It was the second day of school, and they were back in the same building where they had attended alternative high school two years ago.

“What I like about it is we are treated here the same as everyone else, even though it’s an alternative high school,” said senior Elvis Velasquez.

A year after the district shuttered Discovery High School due to budget cuts, Kelloggsville Public Schools reopened its alternative high school building under a new name and model. The change reverses the decision to close the building at 173 54th St. SW, and to instead run alternative education through a program called Rocket Learning Lab out of two classrooms in Kelloggsville High School.

Rocket Learning Lab, which also served both district and non-district students, was a hybrid program which consisted of online classes through Edgenuity.com and face-to-face math instruction. It produced 30 graduates last year but no longer operates.

But Elvis and other students said they like to have their own building and classes such as physical education that they didn’t have last year.

“We got our own gym. We finally got a gym. We can hang out outside,” said William Hernandez, a senior.

While several districts have moved away from the stand-alone alternative high school model, Savage said it’s a good option for many students

“The alternative education population needs places to go to school and get an education,” Savage said.  “We know that there’s a need for a program like this. The benefit for these students is to come to a smaller school. They are served breakfast and lunch and are taught by a smaller staff. A lot of these students need more time and a smaller structure for school.”

While graduating from Kelloggsville High School requires 22 credits, 54th Street Academy requires 18, the state minimum. Explained Savage, “For this population of students, they struggle with school. Doing the state minimum helps them get to the diploma.”

For students from Kentwood, Godwin Heights, Grandville and Byron Center, a Shared Education Entity agreement requires test scores to be attributed to their home districts.

Achievement at Every Level

Along with 54th Street Academy, the district this year added the Achievement Center at Kelloggsville High School for in-district students. Its focus spans both high-achieving students and those in need of extra time. Some students will attend to recover credits, while others will earn credits at an accelerated pace and take online Advance Placement courses.

“You get a lot of kids that fall in the gray area between traditional and alternative education,” said Jerry Czarnecki, an Achievement Center teacher. “If we can be a safety net to keep the kids in this building, it helps the whole program.” Students will have regular schedules but may spend one hour or more each day in the center, Czarnecki said.

The small high school often doesn’t have enough students interested in Advanced Placement courses to fill a classroom, so taking them online is a good option, Czarnecki added. It opens the door for students to take a variety of AP courses.